Stick a fork in it…

I pre-wrote this post to publish while I was away on yet another brief jaunt to sum up a few things I recently finished.  Yet the thoughts in my last whining rambling post have continued to fester and raise many more conflicting/contrasting brain furies.  I still don’t have anything even remotely answered or concluded, but in a way I do have a decision.  I am going to move forward on creating pieces for a portfolio and if they are done by the autumn (crazy insane deadline now) I will apply to school.   If I don’t get in or I do get in but without funding, then I at least have a body of work to throw around out there (outside of the craft scene).  And I don’t want to blog about it much apart from keeping track of new techniques I might learn or continued thoughts on craft vs. art, artist vs. art museum, academic artist vs. independent artist, lone-wolf artist vs. social media butterfly.

So on to finished sh*t that has nothing to do with the above.

Several members of my family are encountering hernia surgery these days so I made a Happy Hernia mini-quilt.* 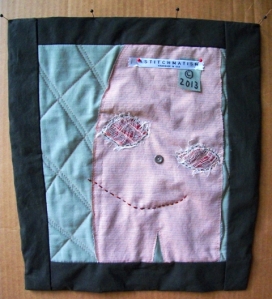 I finished my Pigeonroof Studios BFL “Mimsy” May/June SAL roving as a felted/fulled single.  I spun it with a heavy hand and dunked and steamed and iced and thwacked and whacked and unspun it and made it my fibery bitch.  And for a much-abused yarn, it became surprisingly sturdy and bloomed beautifully.  It’s a bit shy of 450 yards of a fingering-ish weight.  I love fuzzy yarn but I rarely actually knit with it – just ask the balls of neglected mohair in my stash.  But I did start something with it right away which I’ll show next time. 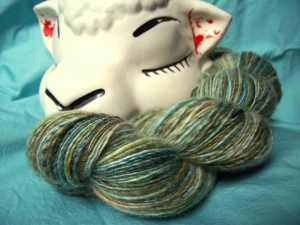 Since I was infected with group think during this spin-along, I joined team PRS in the Tour de Fleece (you spin during the Tour de France).**  I don’t have any crazy goals for it apart from spinning my recent purchases (of which I have to confess that there was another, and then another).***

Finally, my brother and sister-in-law are the hiking sort too, so I sent a set of butt warmers their way.

With the oilcloth, I think these are a little more practical than my original ones (which have gotten a bit shredded) but can also brightly and gaudily serve as a distress flag to wave about.  I’m concerned that they’ll be a bit slippery until they’re scuffed up a bit and unfortunately this sweater was thinner so it provides less ass comfort.  Also my stashed oilcloth has some creases I can’t seem to get out – can’t iron the stuff, so what to do…?

Everything else is still half-baked.  And I also recently realized that I needed to get much busier in order to become more productive, so I’ve taken on a load of new projects (and may also get to up my part-time work hours soon) but I’ve got also got a newly festering anxiety that I may have bitten off a little too much…something might have to give.

*Sh*tty picture intentional since I’m paranoid about image theft and f*ckery these days, and get used to seeing that annoying tag on everything too.

**I like bicycles, and I ride mine (awesome story behind it too) several times a week, but I don’t think I’ll be watching the Tour much… as Italophiles, we do often have calcio (soccer) on the tube though…

***I talk about this way too much!  I don’t know the person/people behind the company in real life nor do I get kickbacks – just love the stuff, and the last acquisition was someone’s bargain de-stash so my spending is ending for the time being.