I just wanted to read a magazine…

I happily made it to the library just in time before the last snowstorm to stock up on readable, watchable, and listenable materials.  Our small suburban branch of a large county library system is fairly mediocre, so I don’t expect to find much when I go, but this time I discovered that they carry Interweave Knits magazine, so I checked out the whole lot.

I settled in to read a few, only to immediately turn to a defiled page.

Though I consider myself a feminist, I am not without humor, and I quite like occasional trashy bawdy bits.  But this?  I sort of feel like a knitting magazine is the equivalent of a women’s college – I will be safe, protected from the predatory male, accepted and uplifted by my peers, and free to not care how I present myself.*  So I felt a bit shocked to see it.  But then I realized it just really doesn’t make sense – why would she say “Pop ’em out?”  Is she saying that to someone else in the room?  Is she speaking to another person about his pop-out-ables, or another lady about her’s?  Or should it have said, “Would you like me to pop them out?”

And the writing is a bit shaky, which could suggest that the author is a man with a G.I.’s racy sense humor from the Greatest Generation (as there are many older folks around here).**

Does it seem a little less creepy that it’s probably from an old dude, or more?

I pondered that while I flipped some more pages, until I was stopped again. 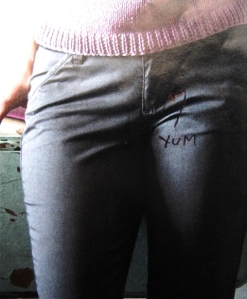 This has no ambiguity.

Anyway, it sets my blood to boil when people deface library materials…

So wanting to clear my mind, I chose some different reading material that took me back in time to the days when the author of the graffiti may have been a wee thing.

I had some bad news lately – nothing involving death, illness, or further financial ruin, but soul-crushing in its own way, so I soothed it with a very minor ebay shopping spree of a couple of lots of vintage knitting magazines (that I got for a song).  Included with them were more issues of Minerva which I added to my growing collection.

But what do we have here? 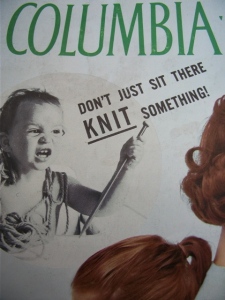 I agree with the sentiment – I find no reason to merely sit, you should at least be doing something – be it reading or knitting or whittling.  But the ugly little thing kept alternating between yelling at me and feigning sympathy with my potential knitting frustrations page after page. 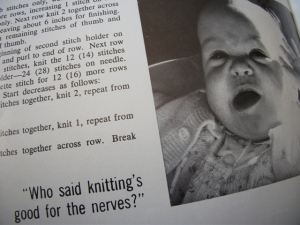 But I also don’t quite understand it either – the baby is criticizing the magazine in which it is printed/housed – essentially biting the feeding hand.  Perhaps this is the beginning of the current obnoxious parenting trend of believing a young child should have say over a parent… 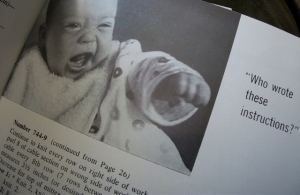 Then my feminist hackles began to rise once more…

I know this is minor, and over 50 years ago and thus considered “acceptable” at the time, but why must a wedding band be on the sketch of the hand demonstrating how to knit?

That’s what I say to the whole thing.

No more magazines for me – I’ll just go back to knitting.

*I know this is an inaccurate (and probably stereotypical) portrayal of women’s colleges, and I didn’t give a sh*t how I presented myself throughout my own co-educational academic career.  And also I know that there are some male readers of knitting magazines and male knitwear designers, but they seem to know how to behave themselves in this largely feminine sphere…

**I guess the WWII folks aren’t so abundant anymore – I’m not keeping up with the passage of time, so the dude is more likely pre-boomer, but not by much…

I finished up my second Hitchhiker scarf out of my handspun “Dragon Days” mixed BFL from Pigeonroof Studios. 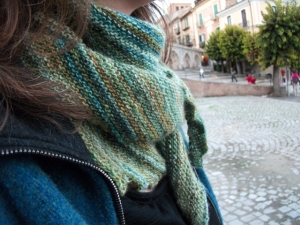 And they are close, but the new one is more green, more intensely hued, and I spun it a little too thin, so the gauge is half the size of the other – or is it twice the size?

I made it for a gift, but I was reeeaaaaally tempted to swap it out for my old one.

The colors are iridescent and change depending on the light, though sunlight is my favorite because it is at its greenest best then.

I love the striping from the spun singles. 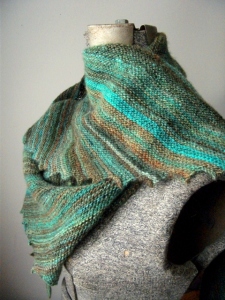 And the size is good too – bigger than my other one.

I’ve got a few more gift knits to complete in the next month or two, so I’m going to continue to be busy with unselfish knitting for a bit (I’m not counting the selfish spinning) but there just might be a startitis explosion soon after though…

I’m done with this winter.

Last week we lost power for a few days.  My brain became more fogged than usual and I started shifting to the left.  I guessed I was getting hypothermia in my own apartment so I laid under a couple of down duvets until clearer thoughts came back… if you could call them that.

N keeps getting snow days from work; I don’t since I work from home.

We’re also sick and I’ve been feeling too crappy to make stuff.

I used to be used to being snowed in from time to time.

And pair them up.

And of course put them back in the old pasta tin I keep them in and they jumble themselves up once more.

I almost never use straight needles anymore, at least the long ones, but I like them as artifacts.

My red Formica table is in storage and I miss it.

I made a little heat-able pillow filled with cherry pits a few years ago.

I love cherries and eat pounds of them each June and early July.

It’s about 6″ x 8″ and filled with nearly a pound of pits.  It’s great for warming knitting-sore wrists or cold hands.

I’d like another, but I don’t think I want to go through boiling and scrubbing and scouring and sanding pits again.

It’s useless when the power goes out too.

*That picture isn’t even the most recent snow – I’ve given up, I can’t be bothered, I don’t want to have any documentation of this sh*t anymore…

**This doesn’t look right, seems like it should be the other way around, but that didn’t look right either and this is the direction I took it – deleting and re-attaching the variously oriented pics was the high point of the day.

The other day N mentioned he was culling some old sweaters and asked if I wanted any – of course I did (all of them).  And to my surprise, he had a swants-able one in the pile – a forgotten cosy but quite misshapen semi-felted/fulled thrift store find from a few years ago.

I immediately began to cut and sew.

I didn’t follow the official swants tutorial because I wanted to make some interesting shapes with the pattern, and the shoulder seams already conformed to my hips.

And then I impatiently set off for the beach, not quite accepting the fact that you can’t really shoot your own trousers while wearing them.

I love the beach in winter.  I love the emptiness and sometimes the ugliness.  I love that the surf washes away the ice and snow and sloggy sh*t that prevents you from walking normally and safely on an inland path or sidewalk.

And when I’m at a wintertime beach in a semi-urban area, I can never stop Morrissey’s Everyday is Like Sunday from playing in my head…

So while the day was chilly, but the sun warm, I filled up a thermos, packed up my ass pad and some knitting* and hit a favorite spot while it was at its most opposite of a smooth summery romping ground.

One of those rusty pipes helped hold the camera, but all of my swants photos are shite.

But the swants aren’t – I love them!

Mine are more knickers though – swickers. 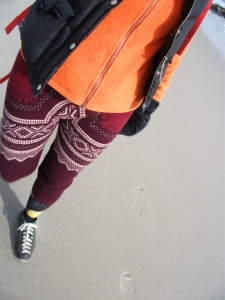 The color is truest here – they are cranberry and maroon.  The front has a somewhat provocative triangular point – though how sexy can sweater pants really be? 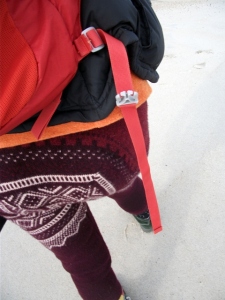 And the back has a squared-off shape not unlike old-timey ass flaps on union suits.

I practically had the beach to myself, but the boardwalk was busy with those just waking up from cabin fever and those who have jolly thick-coated dogs (who must suffer through the hot summers).  But no one bothered me – there’s usually a small motley band of panhandlers and nutters who think being unwashed and under various chemical influences is appealing to a woman – but the swants proved an effective repellant! 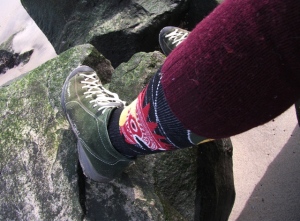 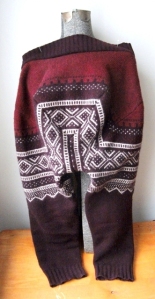 *Yeah, still a little too chilly for outdoor knitting – but it was a good place to take photos of it too – coming soon.

**Smartwool, a gift from N.  I told him I didn’t need anymore socks, he told me I needed these.  He was right.  In the few seconds Morrissey leaves my head, cock socks on the rocks repeated chant-like over and over comes in…

Not too busy for a weekend jaunt…

I am busy these days.

I’m working on some knitting that is taking far longer than I’d expected, but must be completed in a certain amount of time, so I’m monogamous with it.

I’ve been work-working more hours.  And I’ve been doing some blogging for work that fills up that little writing time and space brain-hole that usually gets stuffed here.

But I’ve also been away due to both work and pleasure.  Recently, we had a nice long weekend in my old city visiting our old haunts.

We bought lots of delicious (and cheap) Italian foodstuffs.

Basked in the warmth of radiators (I haven’t yet mentioned how I entirely [and somewhat irrationally] abhor forced-air heat).

Had properly made espresso drinks at our old neighborhood cafe.

Visited the lovely WPA mural in the post office again – it even has a spinner!

And though I didn’t [cannot] visit my old LYS [due to potential uncontrollable purchasing] I did pop in another shop just out of town.  It was one of those tiny places where you’re the only one there and suddenly face-to-face with the owner who seems hopeful and maybe slightly desperate, and either way she’s friendly and helpful and you feel obligated to buy a little something.

(I’m tempted to make another Honey Cowl with it, but I know it will be an oh-so-soft, but pill-crazy yarn, so I’ll either mix it up with something more durable, felt/full it, or most likely,  just sit on it for awhile… The color is more in the forest berries/cranberry range and less purple and pink than it appears – I think the colorway is “currant.”)

And what trip isn’t complete without a thrift store stop?

This is such an entirely uncharacteristic garment for me in terms of color, but it’s a great vintage find.

I bought it to re-sell, but I just might keep it since it fits… winter greys be damned!

(It kinda hurts the eyes though).

(I got it in a small chain of regional thrift stores that absolutely have their heads up their asses when it comes to pricing.  Something that is a “better” department store or preppy shop brand will be priced astronomically, while vintage  and actual high-quality label things are often a steal – which is often a happy coup, but lousy when you find a holey and felt-able or harvest-able sweater and it’s priced at $19.99 but should be no more than $2.99.   The coat above was only $4.99, handmade in wool, in perfect condition, and from a fancy downtown shop that no longer exists…)