Recently I made a decent score of vintage Minerva knitting magazines.  I found them in a booth in an antique mall in a semi-rural area of the mid-Atlantic (or the easternmost edge of the Midwest if you are cynical, or the East Coast if you’re being slightly unrealistic or live way out west and don’t really pay attention to maps).  They were just a couple bucks apiece and I snatched ’em all up.  I had a few from the 1930s in my personal library already, and I have the idea that I will make some of the patterns some day, but now I’m probably being unrealistic.  I fall in love with vintage patterns and then realize I don’t have the rest of the wardrobe to pull it off (mostly high-waisted skirts/pants, and I hate high waists), the knitting skills or patience to figure out how to modify to fit my 21st century body, or the patience to work with tiny gauge yarn and needles.  I will eventually sell off the ones I know I’ll never use, but some are just so lovely to look at over and over. 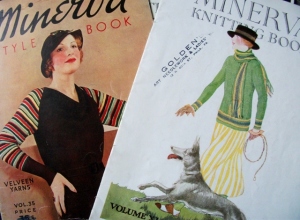 If you asked my what my ideal kitchen would look like, it would be in the sanitary style with yellow and green accents, and would perfectly match the magazine on the right.  I would like a dog in said kitchen as well, and I actually like the sweater on the cover too – perfect for my long torso and disdain of the high-waist.  Many of the patterns in the earlier issues are quite simple, involve a lot of garter stitch and seem to offer a size close to mine – in fact, they only offer just one or two sizes.  It seems like pattern designers of today bend over backwards to try to accommodate as many sizes as possible, when a knitter could just have some better skills and a simple self-modifiable design would be enough.  But as I stated before, though I’d like to have more instinctual and skilled knitting abilities, I’m still working on that, so I should shut up.  The top on the left  is pretty awesome though, and the baggy cowl neck would make fitting a little more forgiving – that one might have a future for me. 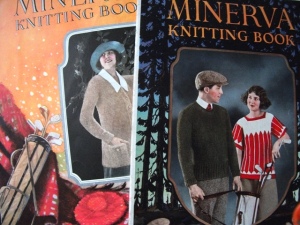 And then there is the early to mid-20th century obsession with “sportswear” that usually involves golf.  Golf.*  Granted, clothing of the day offered very little stretch and flexibility so one had to completely change her outfit if she expected to do anything remotely active, and sport and leisure were often very social so you had to look cute doing said activity, but golf?  I could do some research and find out a good answer about the sport: the middle-class was growing in North America and was gaining increasing amounts of leisure time after the industrial revolution, public golf courses were opening to the masses, both women and men participated (though often not at the same time) and tweed knickers and and argyle socks are just plain awesome, but I will just continue to wonder instead.

*My disdain of golf runs much deeper than the general discomfort of tight high-waisted clothes.  Golf in ye olde times wasn’t too bad and it helped to preserve green open spaces in and around cities (though was very bad for being generally racist, and could be sexist and elitist as well).  But golf of today is an environmental ass-kicking – the gazilibillion gallons/litres of water and pesticides that go into maintaining them is breathtaking, they’re built in places where grass is not supposed to grow, they take up a lot of land for only one purpose, and they can be populated by the stereotypical fat-cat country clubber with his head up his right-wing ass.

3 responses to “Kitchens, not golf”