We went to the beach twice last week which seems downright decadent.  I know I bitch about where we live now, but we have access to a lot of good places so it sometimes evens out.  Our day to day life sucks but the weekends are great; before our day to day life was good but weekends took more planning and travel and another day off or two.

We were at the shore on the 4th, which is probably the busiest beach day of the year, but if you get there early enough, it’s not too bad.  And the day was festive with dolphin sitings, blimps, and biplanes (unfortunately only the dolphins weren’t there purely for the sake of advertising).  There was a surprisingly cool breeze (just along the coast only, not the sweltering interior where we live) and the water seemed frigid, so we didn’t swim.  Instead I finished test knitting a piece that I really love but with a yarn I really hated.

I want to publicly declare my hatred of acrylic, and this Lion Brand Amazing has too much of it!  I like the colorway of this one, Arcadia, and I think it’s supposed to mimic Noro.  This was one of my last big box store yarn purchaes a few years ago and at least at the time it was made in Italy and it was fairly inexpensive or else I bought it on sale.  Now it seems pricey for what it is and there are sooooo many other yarns in the sea that should be purchased before this one.  The stuff is fuzzy but not as soft as it seems it should be – not scratchy but plasticy from the acrylic.  And it was so sticky and grabby that I could drop the ball and pick it up with the working yarn and I often had to rip it apart from itself.  Blech – unpleasant.  But I love the pattern and will try to repeat it with another yarn soon. 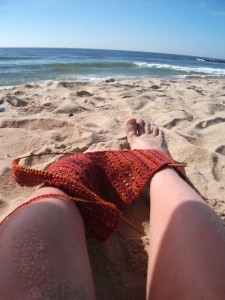 And on Sunday we got up even earlier to hit the beach again and I brought along my Lacy Batkus because it is my assigned beach knitting for the summer.  But the day was hot and the water felt great, so I didn’t even finish an entire repeat.  And yes, my skin is nearly the same color of the sand – we haven’t been outside in full sun or out of the woods much this year yet.  And it’s also really annoying and quite disturbing because other pasty folks tend to set up around us and it looks like some sort of klannish enclave.  But since we’re there in the early morning, we’re gone by the early afternoon when it becomes nearly impossible to swim without getting whacked* by someone and the chatty suburban mommies drown out the the regular beach soundtrack of surf and squeals. 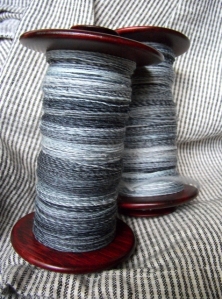 And my thumb has healed so I’m back on the wheel.  I finished my Pigeonroof Studios** SW Merino “Storm” this weekend and I’m waiting to ply it soon.  Next up is a braid of the same wool in a pale green colorway.

*Yes, for those with stereotypical views of New Jersey, getting whacked could sound quite violent for an innocent day at the beach – I’m talking about waves thrusting flailing people at you.

**Every time I pop on over there to grab the link, I see more, more, more I want!  But I really can’t, not now, and I’m coming pretty close to declaring that I’m entering a period of time wherein I buy absolutely nothing beyond food.  And a watch band.  And sewing machine needles if they all break…