It’s all over and too late to see now, but Knit the Bridge was pretty cool (and record-breaking).

We went to Pittsburgh for a little jaunt over Labor Day weekend and caught the bridge on a bright summer morning. 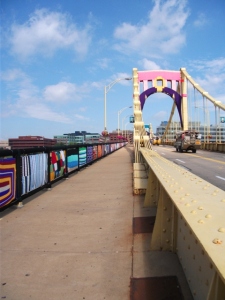 (Got the ass-end of one of those obnoxious duck tour thingamawhats too!)

It was quite a bit more Crochet the Bridge, rather than knit, but they certainly couldn’t call it [yarn] Bomb the Bridge, which would have been more accurate, inclusive, and alliterative, but sadly we can’t say such things these days.

The cheery hanging flower baskets were a nice touch too and complimented the bright acrylic yarns.

The whole thing had a campy, homey feel which was nice, but also played a bit into the knitting/crochet stereotype.

But I won’t criticize that too harshly – overall it was a good thing and acrylic had to be used as the blankets will be massively laundered and donated to people and places that don’t have the knowledge, time, space, or frankly have much bigger issues rather than proper care of woolen hand-knits.

(There were actually many people out too, I just chose the pics without them.)

I sadly wasn’t able to cram in a visit to Natural Stitches which is among my favorite LYSs – it carries loads of good quality stuff in good colors plus some fancy things for the occasional splurge (but not fancy-pants things that are just plain fugly).

But that doesn’t mean I didn’t acquire yarn of some sort.  We also hit a couple of thrift stores and I found a few sweaters ripe for harvesting.  Many of the thrift stores around Pittsburgh don’t take away the sweaters in summertime like they do on the East Coast.  I hate when they do that.

As usual, I don’t have immediate plans for these, but they have the same sized/weight nicely heathered Shetland-like yarn, so something stripey with the two sweaters combined might be in order.  Maybe even a traditional Shetland hap shawl… Purple usually isn’t among my top favored colors though… 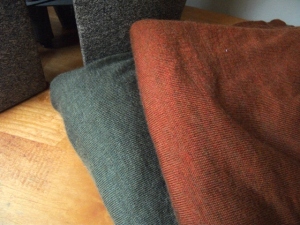 And I pretty much swore I wouldn’t buy thin merino to unravel again, but I liked the colors of these and they’re the exact same sweater, so color work is a possibility, though I’ve fallen down the orange-green hole many times already.

And one to keep as-is to wear (as if I need another).

And I love the slogan on the label: “Wool. It’s got life.”

And I got a few to full/felt.  Only some of them didn’t.  But that’s okay, I’ll unravel them instead.

The ones that did have already become phone cozys/socks/sleeves for some smart phone wielding friends.

I’ve got leftovers for sale too.

(My Etsy shop still isn’t stocked yet though.)