Darn it pills and lint

I spent an evening this week closing up the holes in some of our sweaters.  I’ve been seeing beautiful and skillful examples of mending in the blogisphere lately and though lovely, they make me feel anxious.  Must I learn to do everything perfectly?  To have textile conservator-level mending skills to make repairs nearly invisible or mad creative ones to do a perfect herringbone in a cheeky accent color?  Don’t get me wrong, I love these things and love that someone is doing them and doing them well, but for me, I still embrace  absolute utilitarianism and efficiency when it comes to darning/mending/repairing.  I also usually wait until I have at least three garments that need to be fixed before I sit down to do them, even though it means I’ll probably need three different thread colors and it would have taken just as much time to do them one at a time.   All of the items that got a new lease on life were thrift store finds (some decades old) and I’m always what- amazed, impressed, happy?  I don’t quite know the feeling, but that these things have endurance and history, both unknown and our own, and can outlive us.

N’s favorite cashmere sweater is just a few years old and was probably fairly new when it was given up by its original owner.  (Unbeknownst to me my sister-in-law gave my brother the exact same as a [new] gift around the same time I found N’s in the thrift store.)  He wore it for work and not-work and everything in between several times a week and this year his elbow popped through.  It’s now been patched but retired from work-wear. 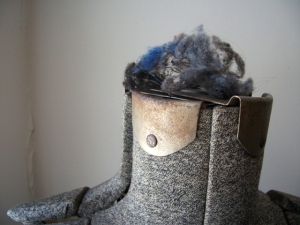 I’m also chief pill-picker.  I hate pills but I somewhat, and somewhat perversely, like picking them off.  I’ll periodically give an item a good pick and then a vigorous brushing and I’m always amazed about how much fuzzy detritus comes away… how much crap we carry around on us and how a sweater can continue to shed yet never feel as if it’s going bald overall.  But I do really hate pills on hand-knits (I’m looking at you Malabrigo!) especially when you’ve done a textured stitch and the pills hide in little valleys. 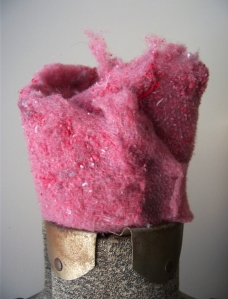 That little pile of pills and fuzz got me thinking about hoarders (and my fear of becoming one, though I do draw the line with things that rot and stink as being only for trash/compost).  And then N bought some new kitchen towels – some white, some red – that gave off this nice rose-pink lint in the dryer.  I know dryer lint has many uses, and once upon a time when I made paper I often used the stuff, but to keep it now seems a little excessive.  I can’t compost, don’t have a pet, haven’t spilled any oil, don’t need to start a fire, and I’m not making paper or papier mache at the moment…

One response to “Darn it pills and lint”