I’m busy and I’ve run out of pre-written or partially composed blog posts, or rather ones that aren’t just one big fatass rant.

It’s been hot and humid and I thought I could deal with it, but it’s been ramped up lately to tip me over into full brain and body stupor.

(The air conditioning in my car is broken and we don’t have any at home yet).

I actually had a bee in my britches a couple of weeks ago and it stung the sh*t outta me.

A bite in the ass does not make one work harder.

I’m sure lighting a fire under it will have the same negative consequence.

Out of some weird mid-life moment, I actually joined Facebook with my real name and it sucks… though I get to bully the old bullies back by choosing not to “friend” them back, but then I feel bad even though they sucked and made me feel like hell in the seventh grade.

I only had about 70 kids in my grade for all 13 years (kindergarten included) and I can’t remember 70% of them.

I’m getting PT for my knee and the place plays this “oldies” station that is the music from my formative record-buying years… it’s kinda freaking me out – too much of my past all at once.

With the near end of the World Cup, I am overjoyed to quit cable television and hope it nestles into its own hell ring.

I’m getting a lot of spam comments on this blog and it’s annoying the piss outta me.

I’m almost finished knitting a medium to largeish-sized project, recently sewed a small project, and thinking about ways to spruce up some ugly hollow sliding closet doors – we’ve got two sets of them…

I also just started to spin a bit for the Tour de Fleece. 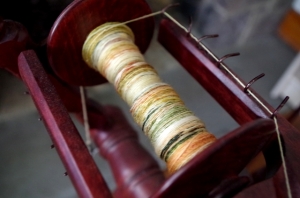 I will finish up this disaster from last year.

(One bobbin spun backwards, I cut my thumb while spinning the next, and it’s been picked up and put down too many times to count.)

I also want to spin some other things I didn’t get to last year.

I can’t find those at the moment though…

3 responses to “Hot and bothered…”