A time for pie

I’m not a huge fan of sweets.

I like a bit of dark – bloody, earthy, dirty – chocolate after some, though not all, meals.

Or nut cake on holidays. 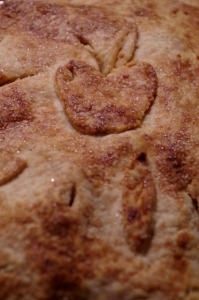 I don’t cook much – that’s N’s job – partly because though eating is a hobby of sorts of mine, most nights I’d be fine with some scrambled eggs and greens or pasta – something quick but nutritious so I can get on with other things.

I am originally from the Midwest, and some might claim that baking is my birthright because of it – like a southerner cooking up the best grits or sweet potato pie, or a Mainer creating a clambake, or a Californian making a… salad – but I credit my years of 4-H (which yes, is largely a Midwestern thing) and baking as as kid at home

But N likes dessert and I like fruit, so a pie or two comes out of our kitchen every so often.

Living in a small town on the edge of rural areas means we can get fresh things by the peck or bushel rather than just a few pretty but pricey pounds from our old urban organic farmer’s market. 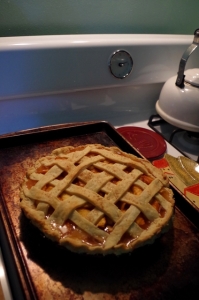 Baking takes more time than I’m often willing to give, and makes a mess larger than I’d like to clean, and I grumble during the whole process, but I do enjoy the end result.

And it helps take the edge off of the loss of daylight.

One response to “A time for pie”