Vested, or not my b[v]est

Once again I got to contemplating my frumpy vest.* 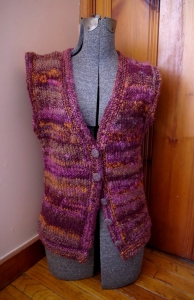 I thought I fixed it enough to be happy enough wearing it at the time of that last post. I had added more length, replaced the buttons, and I thought I re-knit the shoulder edging with fewer stitches or smaller needles, but I’m guessing I just gave it a good block. But after unpacking it from summer storage (from a few summers ago, actually) it had reverted back to its stupidly pointy shoulders.

This is not acceptable.

It would be almost okay if the vest was wide and boxy and I wore it open to just hang there and flop around, but I figured something so rustic should be more fitted to take down the frump factor a bit.

Only now it seemed a bit too fitted  in other parts too – the buttons at the bust gaped a bit. 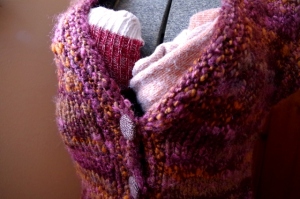 So once I again, I set out to modify it.

I had so little yarn left after making it the first time around, I was hesitant to just frog the whole thing and start over again. I’m still not crazy about vests, but this was the perfect amount of handspun yarn for one. The yarn matches my bike too, but there is too much of it that even if I pimped out the seat and handle bars and other things I’d still have an even more awkward amount left over. And I don’t want pillows or bags out of it, and it’s too rough for next to skin wear, so hats and scarves are out…

So I tried yet again to make it work.

I ripped out the garter armhole edging, opened up the side seams and added a little triangle at the pit for more bust ease, and reknit the armhole with an applied icord.

That worked out to be the perfect solution – much better fit with no pointy stuff on the shoulders.

And I discovered I can wear it over my orange hoodie if I’m invited to march in the garish parade.

But if I wear it open as more of an outerwear thing, it should have a pocket. I won’t go into the rationalization except I think of fitted things having a degree of implied misery, and open things comfort and convenience and of course, that means having a “snot pocket” – someplace big enough to store a hankie for my ever dripping nose once it falls below 70 degrees.

I think I have just enough yarn leftover for that…

*The color is most accurate in the old post – the thing is a bit more subdued and overall burgundy-ish in real life.