I won’t add to the legion of voices bitching about this time of year when the light is left behind and we’re slammed into darkness all too soon. I’m not adjusting quickly enough, though I never do, and I’m cranky and mad about falling asleep over my knitting most nights. I’m working more at the moment now too, so the loss feels even greater, but at least my home office has viewing windows to the wild antics in the yard.

The weather has been hinky too as evidenced by the laundry basket which contains woolen base layers and snot smeared gloves as well as sweaty t-shirts and cotton socks (I don’t go to a gym).

And I’m shaking my fist at the rain gods who still haven’t smiled upon us much this year.

Thankfully we packed some tomatoes when we went on vacation because those were the last tasty vine-ripened fresh bits of the garden that we enjoyed.

There was a light frost while we were away that took out the green beans, and a heavy one the night we returned, so we were forced to pick everything immediately or cover it and hope for the best. 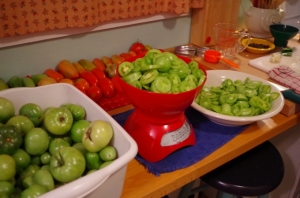 We opted for the acquisition nearly 20 pounds of green tomatoes which were then promptly pickled and canned. Unfortunately, the additional delicious small batch of crispy refrigerator pickles we also made are already long-consumed… I’m not as much of a fan of the squishier canned ones, but I’ll still take them shoveled onto a cheesy sandwich. The lettuces and greens turned bitter and were cooked in a massive heap with lots of garlic and oil and gamely choked down. I’m nursing the last of the borlotti beans hoping a few will mature in time, and a few carrots decided to finally (quite belatedly) show themselves, but I have little hope for them.

Now the non-work daylight is spent pulling out the dead garden plants, moving the deer-chomped yard plants to safer digs, raking and raking and raking leaves and shredding them a bit to spread and dig and dig and dig into the garden… We’ve probably got another two weeks of this nonsense that felt good at first but now seems like it’s eating up too much of the precious daylight…

But the birds are passing through or setting up their winter digs and I’m happy to hear the white-throated sparrows calling out their Sam Peabodys all over the place and the screech owls are more often purring at early dusk instead of too early dawn.