But I hate turtlenecks.

Even though they pop back in and out of style, I generally view them as always out – and smelling of elementary schools in the 70s and overly religious Midwestern mothers who dress decades beyond their age. But mostly I don’t like the feeling of my neck being oh-so-slightly constricted.

I’ve de-turtled a few necks over the years.

(This one also got de-epauleted and de-shoulder padded, and de-gold buttoned – then I sewed the epaulets into the fake pocket to make a whimsical detail of sorts.)

Very often, there is a convenient seam running up the side of the neck that merely needs to be unzipped or picked and voila! A constricting turtle becomes a floppy…

I’ve been going through my bins of thrifted sweaters to see what should be cut up into mittens and such, unraveled, or mended enough to wear…

And I found this horribly weird pinkish, orchid? one that fits really well and lies on the “professionally” appropriate side of the fine line that it skates with  comfortably slouchy – partly because it’s actually a decent length on me and many thrifted cashmeres fall a bit too short.

But even after the turtlectomey, I’m debating about tossing it into the to dye pile, but I run the risk of loosing the good length… and though I think I hate the color, I think I can wear it without looking ill, and it goes well enough with browns or greys…

(I’d probably dye it yellow to turn it orange, or go the burgundy or brown route…) 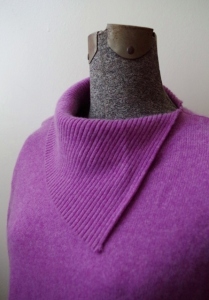 Turtles are also often the easiest part of a sweater to frog since they’re often knitted in rib stitch and don’t felt/full as much as the body. I’ve had several moth-eaten thrifts that were too holey or felted to frog as a whole, but still gave up good bits of usable yarn from frogged necks and cuffs.

Or merely extracted, they make good headbands or hat brims…

And once in awhile, a decent cowl will get detached too – most often from my own sweaters that have generally ceased to function as intended. 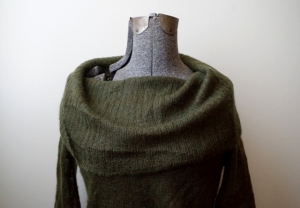 And it can remain cowly, just no longer attached to a body…

This was actually a favorite sweater of mine for about 10 years, so I’m happy to save part of it now that it is done being part of my wardrobe due to damage and too tight sleeves that always annoyed me but now are entirely unacceptable after the home reno and summer of gardening (big guns don’t play well with sheer skinny mohair). And I’ll attempt to frog the rest even though I swore off frogging mohair – if it works, I might knit more rounds onto the cowl to make it GIANT.

One response to “Necking”