Not a Paris vacation

We headed north to the Adirondacks for a much needed vacation recently. 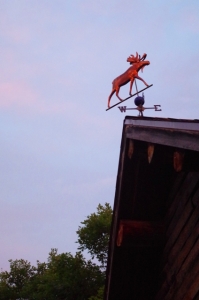 We packed up our hiking gear, the dog and his gear, and lots and lots of our garden’s bounty. 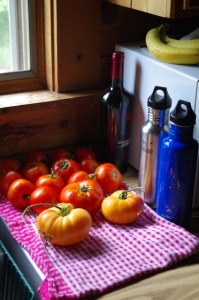 We usually stay in the High Peaks region where good grocery and produce options are few, so we usually bring a week’s worth of food with us.

(Tuna balsamico is a regular staple either in a sandwich on the trail or stuffed into things, or both). 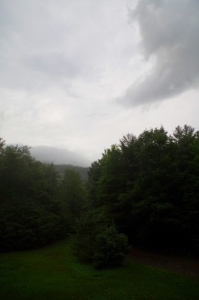 The trip up sucked, and the weather was somewhat crummy on and off, but thankfully the cabin had a generous covered porch. And the rain brought somewhat cooler temperatures that seemed downright lovely for our heat-soaked hides.

(And mushrooms in the floor.)

But it was cool enough to consider touching wool again, so I immediately cast on for a Paris Toujours.

The beginning wasn’t without incident and I might go into detail later – a very minor pattern issue – and it’s a pattern that doesn’t really need a pattern anyway. And of course I forgot my stitch markers again – and I think I prefer the twist tie now…

The yarn is frogged from a thrift sweater and is kitten/bunny/puppy/mouse soft.

I ended up frogging a few more short sections from between the button holes before we left and I’m glad I did – I got nearly a foot of shawl for it and the yarn easily accepted the spit (hot air huff) splice.

The dog failed as a knitwear model.

And as a trail dog on the busier park trails – he’s still too much of an asshole to be around others – but he made a good porch companion and was so much calmer that week without kids on bikes, runners, dogs, cats, certain kinds of jalopies, mail carriers, and garbage trucks going by.

I didn’t get much time on the trails but I got a good chunk of knitting done – the most I’ve done in months. I knocked out a heel and instep on one of the pair of yellow & teal very occasional socks, a few more rows on the last washcloth, and worked a bit on a very long-term hexagon quilt.

The weather was the most glorious on our last day and I felt like the vacation had only just begun – yes, a common feeling, but this time it was too real.

6 responses to “Not a Paris vacation”