Home improvement continues around these parts…

I called in a contractor for shits to price out the bathroom reno I’ve been having trouble with, and of course he charged in with the rallying cries of:

Take it down to the studs!

And I get that when a place really needs to be insulated and the plumbing and wiring needs to be replaced – to a degree – but for a very simple remodel? I shudder to think what would unnecessarily be going into the landfill, and all of the older, better built things replaced with newer crappier things. But we’ll see when the quote comes in – I am willing to pay a bit more for the convenience of showering within a day or two rather than a week – and we know our limits with some plumbing re-installation, so we’ll need at least some professional help, but without seeing the quote yet, but knowing it’s going to be at least 3 times what I budgeted, I’m gearing up for another DIY job with the help of our friendly (but not cheap) plumber instead of a crew… But we’ll see.

During this process, I went to the bathroom store the contractor uses to price out the fixtures. We’re in a weird area of big wealth, muddy farmers (some wealthy too), and semi-scrappy “artists” and ageing hippies (again, either wealthy or hand-to-mouth). In our little town at the fancier hardware store and green building center, everyone is friendly and doesn’t make assumptions based on how you look on your budget – sometimes I want the fancier, better quality higher-priced things, sometimes I want the budget line, but I want to talk about both to see which is the best option. But the bathroom store was out in the vast mcmansion acres and the salesperson pegged me as a penniless shack-dweller and rushed me through to get to the next (bejeweled) customer. This sets my teeth to grind – I want to support the local businesses and I’m willing to pay a bit more for them, but when I can get the same toilet/tub/sink/faucets at the big (blue, not orange) box for a bit less and without attitude it’s hard… but one shit salesperson isn’t the whole business, so I’m thinking too much about it.

But we’re still a few weeks out on that project.

In the meantime, I finished the wood of N’s cubby for the “cloakroom.” 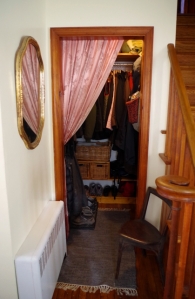 This coat closet added an endearing element to the house during our search – too many of these mid-century cape cods that we saw around here lacked any interesting nooks and crannies apart from the ubiquitous knee wall closets, but this place has a few more closets and turns than the others. Some days I’m tempted to put a little desk in there ala a  windowless cramped dickensonian accounting office or something, and occasionally the dog wanders in to consider making it his den.

It still has evidence of the original children that I didn’t have the heart to paint over. 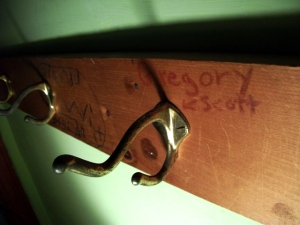 (But I did get rid of the original lime green also seen here.)

And then there are the bedroom closets that aren’t so great. One is large and was built-out with shit paneling in the ’70s or so that I painstakingly spruced up (still need a better solution for the sliding doors, but at least they’re painted nicely now) that N uses. Another is a small, but not-too-tiny size, but with a fairly narrow door that makes reaching for anything not in the middle absolutely annoying, especially before dawn. This one is mine. It is lined in thin dark plywood that should have been some sort of wallboard but wasn’t, and I should have installed some but didn’t, so I thought painting it was the best other option – a lighter color could help me see in there a bit better and the acidic wood needed to be sealed to protect my clothes. 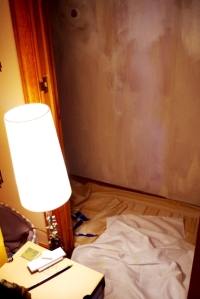 But I should have used the shellac-based primer, but I didn’t want to get gassed out, but instead got slowly gassed out by three coats of the regular stuff… And I went against my always-should-be-followed advice against cheap paint – it’s like trying to coat the walls with skim milk even after all the primer. But I wasn’t satisfied with a fresh coat of paint and the seams caulked up – the floor was still gappy in a few places at the bottom edges and the plywood didn’t reach all the way down, or evenly. 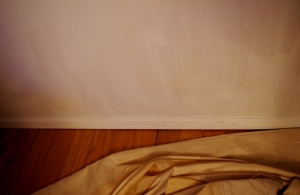 So I added some trim – a bit of over finishing for a closet perhaps, but it’s something I feel oddly strongly about – if something looks sloppy, then it brings down the place – it shows thoughtlessness, carelessness, and makes you wonder what other hidden things are wrong like a fancy meal made with factory farm meat…

And I’d also like to pause here for some unashamed bragging – the closet floors still have the original finish on the oak , and I managed to match it perfectly – seen in the doorway and to the left. (That BFA paid off, right?) The hard wax oil I used has been holding up well and I would use it again, but I just touched up several areas of scratches after two or so years – mostly from felt furniture pads capturing a piece of grit, and a few from the dog, but his claws seem to slightly dent it more with the finish intact rather than scratching the finish off. 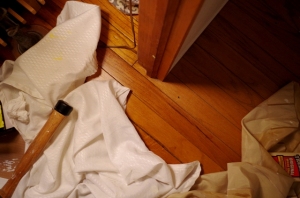 And now I’m waiting for paint to dry so I can put on a second, maybe third coat, let it cure, and then put it all back together (and maybe have the electrician put in a light if they’ve got a bit of time left after their next job here.) 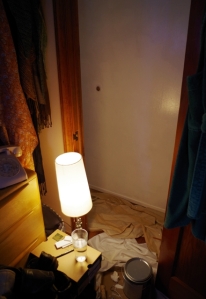 So instead of a project that should have been done and dusted in a day and a half, it will have taken nearly all of a four day weekend and some time off of my lung lifetime.

And there’s another just like it in my workroom that is next, along with trim for the pantry, and hall (kitchen equipment) closet, and linen closet, and maybe the office, but I’d have to move the filing cabinets out first to check…

(And that big Heywood Wakefield double dresser peeking in from the left still needs to be refinished as well, but it is so impossibly heavy and it would be stupid to sand and refinish it in place, right?…)

Tagged as cape cod house, closets, coat closets, home improvement, midcentury house, not that old house, painting, too much to do, weekend projects

2 responses to “In the closet”