The mutt and the pebble

We’ve hit the one year anniversary with Rocco, and it’s likely he’s hit, or is about to, his 5th birthday. He’s just finished a class for reactive dogs in which he was a decent, if not excellent at times, pupil except for a pop quiz with a stuffed (obviously fake) king charles spaniel.

Life with a reactive dog is challenging, limiting, expensive, and still far more stressful than I’d like, but he is improving.

But the most distinct change is that he’s learned to, nay embraced with every last whisker, relax (at times).

He’s had full run of the house and sofa privileges for the last 8 months or so, so most days after his epic dawn hike with N until about 3:00 he rotates between naps on the sofa, his crate, a bit on the wood floors, and the cool stone hearth if he gets overheated. If he’s not too conked out, he’ll join me in whatever room I’m in and try to find the comfiest spot.

During my process of selling used/vintage clothes over the winter when I had things freshly cleaned, darned, and laid out to measure and whatnot, he selected a 90s jcrew rollneck as his spot.

(I let him have it – in the end it was mine I think – I know I thrifted one to sell too – I can’t find that one I think, or maybe mine is put away?) 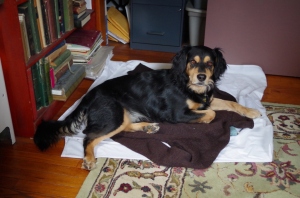 His spot in my workroom is a 90s oversized sweater too.

Dog has no appreciation for handmade on antique sewing machine recycled denim curtains (who the hell had denim curtains) turned into crate bed. Or he wanted to rock hobo chic. #visiblemending #youarenotapuppysochewingisnotcute #ohtherocco #dogdamage

But he leaves the pad beneath it alone, so I started browsing the clearance dog crate pads from time to time to add a few more comfy spots in the house and found one in his size for not too much. But he never used it, and seemed to go out of his way to avoid it. So I sat on it, laid on it, rolled around on it, and was mildly shocked over and over…

So that’s why a synthetic plush pad ends up at the remainder store and on clearance – and I should have known better.

But making a cover was easy enough, and I had leftover cotton fabric – the brown was the excess fabric I trimmed off of the office curtains, and the patterned one was a couple of yards I got to make the main sofa cushions before I decided I liked the yellow better (seen above – though the yellow isn’t such a good choice now with a partially black dog…). 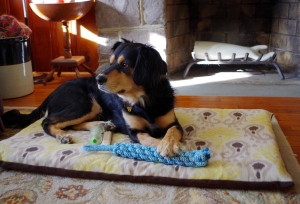 And he took to it right away.

2 responses to “The mutt and the pebble”