I got my grandparent’s c. 1939 club chair  and ottoman over 15 years ago, intending to make a new slip cover within a year or so…

It is where I knit and sew by hand (usually while watching TV), read, and occasionally nap. It’s the one piece of furniture that the dog isn’t allowed on (though he doesn’t always agree), and I feel I have a right to boot the other household member off (it’s also the spot with the brightest light in the room).

It showed up here once already when we finally moved out of the too-long held storage locker – and it’s a beast, but N thusfar has moved it with seemingly little effort, but with follow-up of ibuprofen and tiger balm…

My mom states the original fabric was something like a mohair velvet in dark green, then it was reupholstered in a nubby boucle, also in a dark green?, then my aunt had it rebuilt and reupholstered in the ’70s (or maybe early ’80s) in a loosely woven rust-colored acrylic, then finally, my mom had a professional slipcover (seen above) made for it in the early 1990s. I never liked the slipcover – too stodgy? or maybe because I’m just not a fan of navy? But it worked in their house, and it never looked horribly out of place in ours, until it finally became utterly threadbare and faded. The rust fabric underneath actually works fine in our room, but it is heavily pilled and continues to do so even after grooming, and is a fiber/dog/people hair and dust horder.

I stocked up on a few upholstery-appropriate fabrics around 15 years ago as well, both for this chair and my old sofa, though all were various remnants and/or one-of-a-kind bits from other’s stashes found at thrifts and such. Originally I had a floral faux barkcloth and complementary orange velveteen stuff picked out for this, but I was about a yard too short on both, (or I still have and like this woven orange) but we’ve ended up with a muted, earthy color scheme in the living room at the moment, so I narrowed it down to two browns:

This is my knitting chair (my grandparents c. 1939) with an ugly but professional slipcover (now threadbare). For nearly 15 years I've procrastinated sewing a new one, and now I don't want a brown one, but that's what I've got… #procrastination #comfychair #ihatesewingtofit #slipcover #brown #midcenturymodern

The folded-ish wad on the right is actually a fabric I like – a nice woven with several shades of brown – but I didn’t want to “waste” it since it was over 7 yards and could still be used to cover that old sofa. And the other is a medium to heavy weight cotton canvas in a faded tobacco-spit color.

But to rewind for a moment – I wanted a nice well-fitting professional slipcover – , I can use a sewing machine, but I can’t fit, or rather have the patience and determination to make things fit. So I called around to some reupholsterers who said reupholstering would be cheaper than slipcovering (it wasn’t), then I called some seamstresses whose rates were reasonable, but they wanted the chair in their shop* (renting a truck or paying an additional fee), and preferred I buy their preferred fabric (limited choices and $$$ – and I get that’s so they don’t have to sew with shit and the customer gets angry if it doesn’t hold up). And I sat on this for a bit – the chair is worth it – it’s in perfect condition structurally, has built-in nostalgia, is timeless, and the most comfortable piece of furniture I’ve ever had – but – dog. And flying bits of fiber. And coffee cups on arms. And not realizing my knuckle is bleeding. And the internal workings and foam cushion are fine now, but I can see the need to replace/repair them in another 5-10-15 years so it will need a full treatment in the future anyway.

So then I shopped for pre-fab slipcovers – I won’t go into the weeds about finding them for the chair but not the ottoman, or the ottoman but not the chair, then nearly settling on one boring drab sage-green (other choice was chino-khaki – no, or white – no) for the chair and resigning myself to sewing one for the ottoman out of a complementary fabric and making a cushion for the chair out of the same, and all could be done for around $50…

But why spend $50 when you don’t have to, and get a temporary cover that won’t fit right and annoy you, when you can make that shit yourself and have the same annoyance and not be $50 richer either?

So before most projects, even though I can flip the suck it up buttercup switch and get it done, there must be a self-sabotaging period of procrastination. This one involved sewing machine choices. I wanted to use the hand-cranked machine, but it was still sluggish and I figured it needed to be fully dismantled and cleaned and greased-up, but I’d never done that before, (and I found and lost and ordered? and lost the spool pin for it) so in the interim, I ordered heavy-duty needles and thread and forgot to order machine grease.

Those came, so I opened up the innards, saw everything was sticky and blackened, wondered what else I could buy to make it worth my while for a trip out, or order of grease, and tried to watch a video about properly cleaning old machines, but said fuck it and doused the whole shebang with oil.

So in theory I was ready to sew, but I still didn’t know if I had enough fabric. (I think it was just 5 yards, but wide ones, and I lost the paper I jotted it down.) So I cut out chunks roughly the size of the parts. It seemed that I had exactly enough (minus the seat part that would always be covered). I tried using the old slipcover as a pattern and marked and measured for about 3 minutes, but that’s tedious, so I just started pinning shit together and sewing as I went. 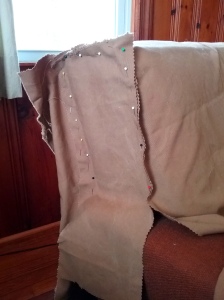 That worked surprisingly well, though I had to remember left vs. right shit on the arms, but I didn’t have to pick out a single stitch, so that deserved a triumphant lap (or lying on my back on the floor until the light noticeably shifted). I used what was trimmed off of a too-long curtain for the seat part, and got good use out of a fancy letter-opener for turning out corners.

Somehow I got through it – start to finish on a weekend (probably 3-day weekend) – the hemming in place was probably the worst part and shredded my fingers and back ligaments. There was a moment of staple gunning on the side panels, but it had no purchase, so a few pieces got sewn to the chair, and it fails as a removable, washable slipcover.

A newly covered pillow rounded everything out, and yes, I didn’t bother ironing the fabric when my back will eventually do that job, and yes, the ottoman has nipples, but my heels will eventually smash those down too.

I’m still not happy with the color (I wanted something in the muted aqua/dirty teal/not quite forest families), and it still looks like its wearing a somewhat baggy slipcover even though it isn’t, but it’s not preppy/nautical/90s faded threadbare anymore, so that’s what counts and that’s what it will be until I get around to getting it reupholstered for real in a few more decades…

*When my mom got the navy slipcover, a woman went out to their rural house, took a shitton of measurements, and came back with a perfectly fitting cover with strategically placed zippers a short time later. The cover has been washed and dried and abused and still fit like a glove decades later. She knew her shit.