I had to save my biggest and best tin for a post of its own. 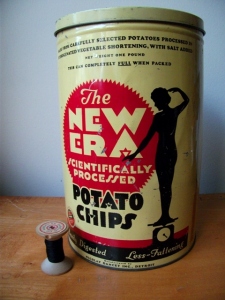 I first saw this tin in a photographic negative I was cataloging in my old job.  The tin was on the counter in someone’s kitchen in the 1940s.  I read the writing through a tiny loupe and was aghast at the boasts of “scientifically processed” and claims of healthy hydrogenated vegetable shortening!  And what is that graphic?  A woman on a scale inferring that potato chips were diet food?  Hells yeah!  I love potato chips, though they’ve done nothing for my figure, unless of course I eat enough to cause severe anal leakage, but I’m a snob for the olive oil chips anyway.  I started seeing this tin in antique/junk stores but they were often rusty, or the lid didn’t easily come off, or were just too damn overpriced.  Generally, if I want something that isn’t really needed, I wait for serendipity to take over or to lose interest in it.  However, after a year of looking for this in the right condition for the right price, I broke down and found one on Ebay, so it all worked out.  Maybe serendipity is just an online market.

But in my quest for simplicity and curing former impulses and diseases of the hoarding of neat sh*t variety, I have a general rule for visiting antique/junk shops – buy nothing bigger than what would fit into my hand.*  In theory I like some kinds old jewelry so that could be allowable, but I’ve never actually bought any old jewelry and it is usually more than I want to spend.  I have more tchotzkies than years left in my statistical lifespan, so I generally resist the cute/weird but useless item.  And I have nearly a zero interest level in military, presidential, I-am-man-and-hear-me-roar (or just destroy your lives and countries) artifacts, so old bullets, campaign buttons, coins, pins for distinctions, etc. don’t get the slightest glance from me.

But what else is little and can be extremely practical, and thus 100% approved?

Let’s open that giant tin, shall we? 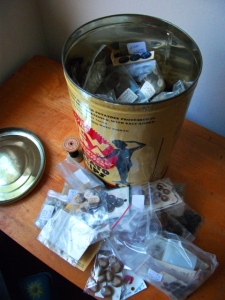 I buy buttons that I think will look good on knits I’ve never knitted (nor will).

I buy buttons that I think I can re-sell for decent money (though I haven’t yet).

I buy buttons to replace those already on my clothes (which I’ve done once).

I buy buttons to use in my “crafts” (I do this occasionally with singles, but would never break up a set).

I buy buttons to repurpose them as jewelry (though not to make country button necklace shittery).

I buy buttons to one day feed my burning desire to amass them in a giant heap and then catalog them one by one.

And I buy buttons because some are nearly art and quite frame-able or worthy of display on their own.

(I didn’t tear off that one button in the upper left, it came that way) 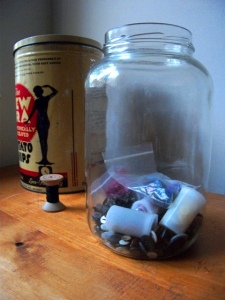 I’ve had to start a new jar nearly the same size as the tin for the buttons I remove and save from clothing I cut up and turn into other things.

(And yes, I do have another boxful of buttons that you don’t get to see).

*I’ve got some big paws, so my fingers can really wrap a decent-sized find, and I do break this rule constantly if I find things that are fiber-oriented and thus can be considered a business, art, or research expense (but really, I can only kid myself so far…)