I don’t love this time of year with its certain few months of icy doom yet to come, but it’s my favorite change that happens in a year when the afternoon sunsets get pushed back little by little into their proper, later position.

I used to take off a week this time of the year, not to celebrate a holiday, but to work on and complete a major project – fixing/painting something around the apartment, or a quilt, or a major reorganization, cleaning, and purging – a defucking so to speak. It was a time to stay at home, away from shoppers and germy gatherings, garish decorations and terrible music, and enjoy some solitude, naps, Chinese food delivery, and the satisfaction of something large or looming being accomplished. But I haven’t done this for several years for various reasons, though I still have the twitch to accomplish something (even though the last several years have been nothing but fixing up houses…)

The tiling job earlier this month gave me a good dose of a similar satisfaction, and the rest will just have to come in the form of smaller-scaled projects finished and started in these weeks.

A couple of weeks ago, I finished up the gift hat I started on vacation:

And that pair of socks I started last June despite some issues with the yarn:

I cast-off them off a few rows prematurely (and I’m still on the fence about overdying them in yellow) so I could immediately start on a new pair based on my doubling experiments:

(And I’ve already lined up the yarn for the next after these).

And I’m just about to start a pair with a single strand on smaller needles.

And then I couldn’t wait to start yet another Lacy Baktus: 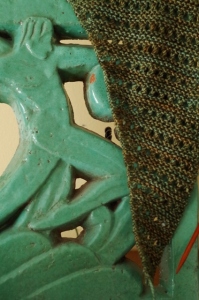 This was also one of the very few yarn purchases I made in 2015 – I pretty much stopped buying yarn except for an immediate project need – and it was from a big Pigeonroof Studios seconds sale – high twist sock in an unnamed color, 2 skeins so I can make something extra large and squishy.

I’m also going to continue to not really buy yarn this year, or basically for the foreseeable future – I have a big enough stash, and I’m slowing down.