The color blue, not a sad state or form of American music.  I went to Rhinebeck, also known as The Duchess County Sheep and Wool Festival, also known as New York State Sheep and Wool Festival last year.  I did not knit my fingers bloody trying to finish a “Rhinebeck sweater,” I did not have a checklist of kniterati to meet or booths to visit, and I did not have butterflies in my stomach as we drove up.  I grew up in a rural place and I love farm animals, but every summer involved 4-H fairs with long lines, hot humid smelly fly infested stalls, and greasy carnival foods served by even greasier characters.  In the autumn, my small town hosted a gianormous craft festival where I had to spend countless hours in booths selling various odoriferous foods in scorching or freezing weather for charities, or man my mother’s own craft booth.  So I could take or leave most fairs and festivals.  I went to the Maryland Sheep and Wool festival a few years ago, and it was hot and humid, the food was mediocre at best, and it was way too crowded.  I bought a whole fleece there that I’m still carding by hand (and it was before I learned about skirting) and I doubt I’ll ever finish it.  So with a bit of a chip on my shoulder, we headed north.  First promising sign was there was a decent variety of local foods, including fresh hot cider:

And of course there were lots of sheep, goats, camelids, and other furries, though not as many or as many varieties as in Maryland, but that was ok.  I really want some of these one day. 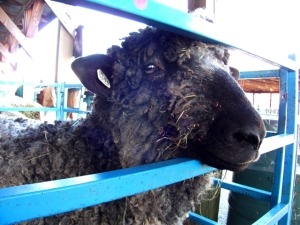 And N was happy to schlep some of my stuff while wearing one of my early handspun hats.  And do you notice that the weather is beautiful and mild, not too warm, and there’s nary a person in sight?  Oh but there were hordes, and by mid-day it was too crowded to shop, but the layout of the fairgrounds was good – lots of breathing room and benches and grassy fields to get away from everyone. 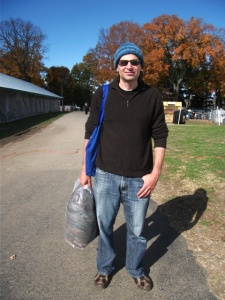 And see all of the blue?  Blue is yet another color for which I’ve got  a complicated relationship.  I like it in theory – I like blue and white porcelain, blue glass, and all of the instances of blue in nature, but it is a color I don’t normally wear, and don’t usually like on my walls.  So, in hindsight, I think the blue sky and sheep pens influenced my purchase of this smoky blue roving tinged with a tomatoey red.

My spinning finger turns brown with gunk after a few minutes, and let’s not speak of the vegetable matter that I’m ignoring while spinning but will later regret as it pokes and scratches me in a garment.  But I will finish it up shortly and I hope I have enough for a sweater of some sort – I know I should have two pounds of the stuff (the lanolin and dirt is contributing to the weight) for a comfortably large sweater, but it might just be enough.  I’m spinning an aran-ish weight.

I can’t wait to see how this will knit up – I’m going to wait to swatch after I’ve finished spinning… I also have a holey Shetland sweater ready to be frogged that compliments it, so I could add in a stripe or two or collar if need be (this might not be the right sweater, I think I have another that is more pinkish, but this one will do too). 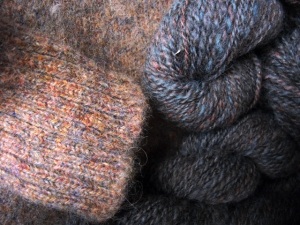 And I think we’ll go back to Rhinebeck again this fall… though don’t expect me to wearing something made from this, unless I come down with the seemingly contagious Rhinebeck fever (or fervor).