Tag Archives: digging in the woods

Neck stretches and why I’m not an archaeologist 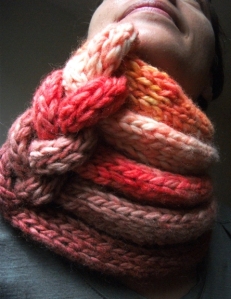 I can now reveal my Waneka cowl by the fabulous and fun designer Annie Watts (aka Wattsolak).  I used my recent Kool-Aid dyed yarn for a super bulky version and totally love its gargantuan squooshiness.  The pattern is easily and brainlessly adaptable to any weight of yarn – thinner yarn = more coils, thicker = fewer.  And it looks great with gradient dyed yarn – a perfect one-skein project especially for the thousands of beautiful indie dyed hanks out there at wool shows and in webworld.  I also made a  worsted weight version out of the maligned Lion Brand Amazing, and though I love the colors and the pattern, I still hate the feel of the yarn. 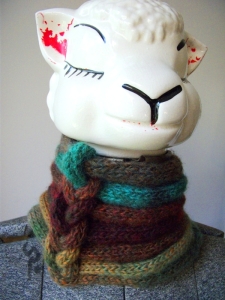 And I actually prefer my obnoxious-hued, still slightly noxious-smelling version. 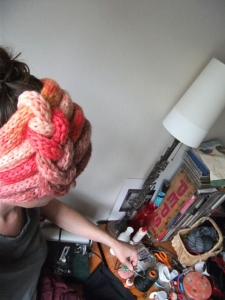 I can even wear it on my head.  Aging old-time Hollywood actress turban-chic.

This has had me remembering my youth (yet again – I guess I’m doing some mid-life thing) and the countless hours I spent traveling via National Geographic magazine.  I couldn’t stop thinking about neck rings worn by Kayan and Ndebele* women while I was knitting. 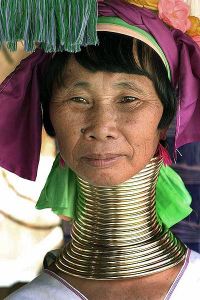 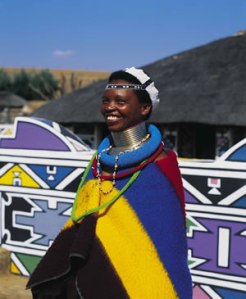 Of course Waneka won’t ruin your collarbones or require marriage…

But as a child, I was utterly fascinated about the rest of the world – especially cultures that seemed unchanged or little changed for thousands of years.   When not reading or playing with animals, my other favorite pastime was digging up old sh*t – fossils in the creek, arrowheads in the field, or broken saucers, rusted scissor halves, and bottles in buried trash heaps in the woods.  By the age of nine, I was quite certain I wanted to be an archaeologist.  Luckily around that time, we had a class assignment of interviewing someone who was what we wanted to be when we grew up.  We lived in the sticks; I have no idea how most people were employed around there apart from service and functional jobs – teachers, undertakers, auto repair persons, farmers, and the like.  I don’t remember what my classmates wanted to be (and most girls were destined for early motherhood and possibly marriage anyway).  But my parents actually found a relatively local archaeologist at a university in the closest thing resembling a city 40 minutes away.  I was nervous about interviewing this professor – it was like meeting Indiana Jones or glimpsing into my certain glamorous and fulfilling future.

At first glance, his office was full of books and sunlight was streaming down on piles of Very Important Documents about Very Intriguing Finds.  He was (and yes, I could be making this up) cloaked in a brown corduroy blazer with worn elbow patches, mussed with unclean hair and a lack of a shave, and sporting a timeworn look of fascinating experience and adventure.

Then he opened his mouth.

I don’t know much about children, but I know that up to a certain age you should deceive them into thinking that life is ok.  If you study and work hard you can achieve whatever you want within reason.  Money should matter less than happiness.  It’s best to do something you love and the world will embrace you and appreciate your effort.

But instead of encouraging my little sh*t self, he launched into an epic and exceedingly bitter rant about the profession.  It boiled down to: don’t do it because the pay is sh*t, the days are long, hot, and tedious to the point of self-immolation, your projects won’t be funded or so severely underfunded that you will pay out of your own pocket, you will have to resort to teaching and you will not be respected at the university and will have to sell your soul to campus politics, tenure games, and administrative delirium, you will loose your marriage, your kids will despise you, your dog will run away and you’ll die stinking in the streets.

So today, though I work somewhat in the history business, I am not an archaeologist. 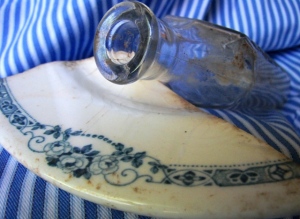 I still occasionally dig up old broken sh*t in the woods though… (when not knitting of course).

* Pictures (that aren’t mine) yanked off the web from here and here.