My knitting project monogamish practice continues – it’s been around a year, and my number of projects has dropped and remained stable – I still need some variety for finger comfort, portability, and a very small allowance for rodent brain, but hopefully I won’t have any more years long sweaters in which my body/tastes change in the duration.

Rocco got a new sweater made from the sleeve of N’s old sweater during the last days of winter.

The yarn to add the extra bits was the unraveled stuff, so it matches and looks like a legit dog sweater rather than a sleeve with just a few evenings worth of work.

Also from the previous previous post, I finished a summer cardigan in time to wear it for the appropriate season. 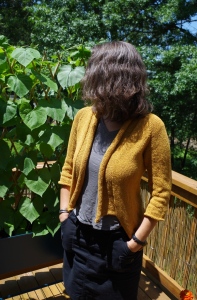 It’s a super-easy Amiga in the discontinued yarn “Bamboucle” from Elsebeth Lavold, which is a shame since it’s a good one (so far) – interesting texture, and a comfortable cotton/bamboo/linen/nylon blend. I got it in a remainder bin X years ago, and didn’t quite have enough, so I shortened the front bands in order to get 3 or so more inches of essential butt-covering length. So it’s slightly odd (vaguely tuxedo-shaped?) in appearance, but perfect for office air conditioning.

There’s a good chance I’ll make another one of these, but the next one will be slightly sized up (I had some funny numbers in between two sizes), and the front bands will be full-length. My other mods of narrowing the sleeves after the elbows and taking out waist shaping (was it in the pattern? maybe not) will stay, and buttons will be up for grabs – this one doesn’t have them. I think I need to thrift another cotton sweater first, but I do have a weird sparkly green one that would be good held with something else.

And speaking of unraveled thrift sweater knits, my mom got a Rosa’s Caponcho earlier this year too.

I loooove this pattern – easy, fast, and practical – I’ll probably make another for myself at some point – it’s great for handspun. This one is from an old favorite wooly commercial sweater that became too tight in the bust and a little too short, and a thin strand of a few plys of black nylon? and one of metallic from a thrifted ribbed turtleneck.

Currently on the needles: a handspun shawl, giant handspun blanket, dog cushion, scarf that might get frogged and is mostly a travel knit, and the ubiquitous pair of socks that just need long cuffs are now mostly beach knitting.

Knit the first sock foot up north last year, knit the second at the same cabin this year; not sure when and where the cuffs will grow up… #knitting #sockknitting #handknitsocks #campfire #wool #supersocke

Spinning has ended for the season, and sewing has been in a suspended state of I want to do it, but I run of of time every day – the garden and tiresome office work is mostly to blame…

This is a common shape of a sleeping pet:

But this is the first dogball Rocco has made since he’s been with us since May.

I figured he’s getting chilly – he’s from South Carolina and perhaps has never seen snow, or been through the annoying shoulder seasons when it’s colder indoors than out.

So I tossed on a felted/fulled thrift sweater on him for shits and he seemed to really like it. So I half-assedly started to make a dog sweater thinking he’d likely try to eviscerate it as soon as it was finished and I didn’t want to pour too much time and energy into it.

The sweater must have been a more recent (yes, from April or early May as seen here) acquisition since it was at the top of the wad on the floor and I know I liked the zipper and its reharvestable potential, and while the color isn’t my favorite, it goes well with greens and whatnot, so I think I was planning to make mittens and fingerless gloves out of the rest (I didn’t want to touch felted wool for most of the summer, so I haven’t thought about it much or dug out the rest of the felted stash to check for coordinates).

Rocco continues to be very difficult for us at times – I used to solidly stand by the statement that “there’s no such thing as a bad dog, just bad owners,” and while I still believe that is sometimes true, reactive “bad” dogs are very challenging and oh-so-slow to become “good” despite good constant and consistent training, expensive behaviorists, and medication.

But he’s made remarkable progress with obedience and communication and general fond companionship in the house (let’s not talk about the counter surfing though). I’ve just allowed him in my tiny upstairs workroom on supervised visits and he’s the dog friend I’d hoped to have – calmly lying in the only open space on the floor as I spin or dick around with fibery things. He also doesn’t mind the noise of the sewing machine (though the food processor and blender are still monsterly).

The back piece of the sweater seemed to be just about the same size as his back, so I cut it along the seams, and then cut a few pieces to use as straps. He was being unusually patient and non-wiggly throughout the whole fitting process so I risked safety-pinning it together and having him wear it for a few minutes and he seemed game and the fit was good enough.

I trimmed up the pieces to fit his contours a bit better, sewed both ends of the chest strap so it could go over his head, and sewed a piece of the grabby side of velcro to the body strap – it attaches to the felt easily so there was no need to use the other velcro half. (I also made sure there weren’t any pokey edges on the stiff velcro.) 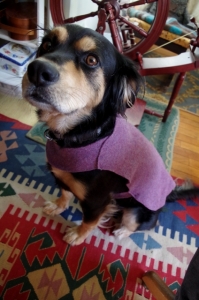 And in a few minutes, he was happily wearing his new sweater.

And I think it’s got a bit of a thundershirt effect on him as well – he was noticeably a bit more relaxed wearing it – though it could have just been the novelty and coziness factor. I’ll wait and see how this one holds up or doesn’t get chewed before I knit one or sew something with better fit and coverage – he’s going to need it if we have a repeat of last year…

(We got his DNA results back recently and found as we expected, he’s a Heinz mutt, but he’s got a Husky grandparent, so hopefully he can tap into that when the cold comes – and it’s likely the source of his markings, or else his black and tan came from a Cocker Spaniel grandparent… Definitely not the “Shepherd mix” the rescue claimed, nor the “Rottie mix” his original shelter claimed and the rescue whitewashed… so we’ll just settle on “Spaniel mix” since he’s got the most of it.)