Some time in January

I’m on a wrap-up bender and actually might be able to stick a fork in a couple more things by the end of the month, but I don’t want to jinx it…

But I’m here to keep track of things, so you might want to hit snooze for the next few posts…

One thick sock is 90% done (still needs top ribbing, I always do that last and at the same time as the other to maximize yardage) and another is fast on the way – first socks are usually a very slow, very occasional project for me, but I get a burst of impatience after one is done – I have the opposite of second sock syndrome – second sock mania?

And there’s still a bunch of tasks to do around the house – some tiny and doable in a day, others still make me want to weep.

I thought the official bathroom re-do could wait another year or too, and while the painted floor is still just fine, the underneath is not… I’m still not 100% on tile though, originally I wanted marmoleum to keep the weight to a minimum and still think it’s an issue, but it’s got some issues too (mostly $$$) and the sink I’d been pining for isn’t made anymore, and our water stains in a dirty rainbow, so I can’t accept wanting white fixtures but not being able to fully clean them and/or willing to constantly clean them, but the beige has got to go and dark grey fixtures would be hella expensive and potentially scare off a buyer and/or my favorite toilet is white only, and I can’t figure out the shower walls, and… no other house project has been so frustrating for me…

But I finally replaced the floor in the pantry – from this godawful “vintage” vinyl:

To this contemporary godawful vinyl:

It’s awful because it’s vinyl and I oppose vinyl in nearly every circumstance, and I wanted black-ish stuff and this is faux soiled metal of some sort – but – it was only three tiles and it’s where the recycling can and back-up water supply goes, so it doesn’t really matter except that it is no longer annoying to see that nasty old stuff. The original linoleum is still holding up, but if we’re still here coming up on another decade, it will likely need to be replaced, so we’d probably just run the flooring into the pantry too (the old linoleum was there, just gouged up beyond repair).

(I’d also like to get some lighting in said pantry, but then the floor would look annoying again.)

In the same weekend I finally got around to fixing the caulk around the kitchen sink that I should’ve done better the first time around, touching up paint, oiling the counters, and N built a nifty cubby in our cloakroom.

(That I still need to finish, but I’m waiting on the oil wax.)

I’m still in full-on cold-sheep mode again for yarn this year except for festivals and legitimate need – usually that ends up being superwash for gifts and whatnot – my superwash stash/scraps only fit in the equivalent of a shoebox at any given time – but this reflective yarn caught my eye recently and I got both some godawful nasty acrylic on the cheap, as well as filament/thread stuff that I can hold with a better yarn. N walks the dog in the dark on sidewalkless roads so they both could use some items made of it.

The orange yarn also broke my buying made-in-China ban (could have sworn it said made in Turkey, which I know nothing about the conditions and regulations there, but at least it’s not China?) But the dog’s fondness of mud and brambles limits things to the very cheap and warm-washable. There are some reflective wool blends out there too, but I’m hoping the spool of filament stuff is the way to go for human wear – especially since I scored both an orange cashmere and another orange wool sweater perfect for unraveling at the thrift a few months ago…

I tend to get a little obsessive/fanatical about certain colors, textures, and shapes.  For a few years, I loved the diamond.  Not hard-assed sparkly rocks that people die for literally and figuratively, but the shape in a flattened geometric form.  I had some awesome diamond-shaped eyeglasses back in the late 1990s that I wore to dust; I have some argyle clothing, jewelry with diamond shapes, some great vintage diamond-shaped buttons I’ve yet to use, and I’ve sewn and knitted many diamonds.

Little did I know I had a thing for hexagons too.

I knew I liked antique hex tile floors.  I had an original one in my first roach-infested apartment (it wasn’t the first of several infested, it was the first and happened to be infested).  And I fantasize often about having one again (a tiled floor, not an apartment full of cockroaches).

I photograph tiled floors when I see them, including this one in the late 1990s, which also served as evidence in case I was brutally murdered or came down with an incurable STD or sudden Bukowski-like alcoholism from the seediest hotel I’ve ever patronized in Niagra Falls (I mean seediest ever, not one of many in Niagra Falls).

And check out this awesome antique floor in a non-hipster cafe in Brooklyn I saw last year: 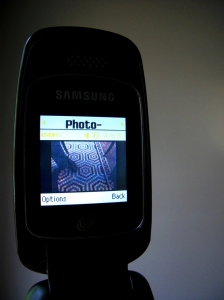 (And yes, I have a cheap-ass pre-paid phone and can’t figure out how to email the picture to myself, so yeah…)

When we first started fixing up our former house, I was completely and entirely ecstatic when I found this in the bathroom: 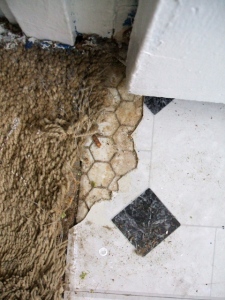 However, my joy was short lived when I found other things:

And the absence of the tile throughout and/or layers of cement and other impenetrables that prevented us from salvaging the original floor.

I wanted to put down a new authentic porcelain hex floor, but the high price sent me to the big box for the cheap alternative: 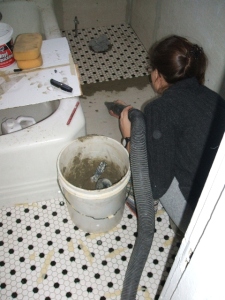 Still porcelain hexagons, but not quite the real thing – the real deal is more flat and matte with thinner grout lines.  I loved that bathroom though, and I yearn for that giant cast-iron tub again…

But I’m still always on the look-out for hex floors and sometimes find them in surprising places:

Like out in the woods in the middle of nowhere.

But the fiber word is awash in hexagons as well.

One of the classic quilt patterns – Grandmother’s Flower Garden is all about the hex.

I found this in an antique shop last year: 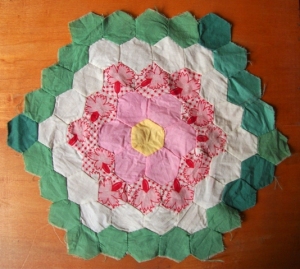 Look how small the hexagons are!  The tiny little hexes are just a little bit bigger than a hex floor tile. 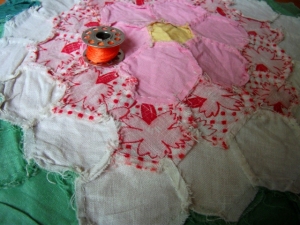 I wonder if the maker was sick of it after one motif, this was a leftover from a finished quilt, it was made to be a chair pad or other small item, or yeah, maybe she (maybe he but not likely) died.  I love the inconsistent greens as well – I wonder if it was made from old-time scrubs or nurse’s uniforms, or if the fabric was home-dyed.

For those of you in the knitting world, you’re probably expecting me to say I’m hip-deep in hexipuffs for the Beekeeper’s Quilt and that’s what this is all about.  Nope, though I like it a lot, and considered it for a little while, I’m going to pass for now (even though I may have purchased a few mega-sale skeins of sock yarn with this in mind).

I occasionally find myself designing floors for bathrooms, kitchens, and foyers of homes we don’t have.  In fact, one of the houses we purchased over the last year had a half-bath (I hate the name “powder room”) small enough that I could justify the price of the real thing and to my own custom design.  But alas, I must settle on non-floor hexagons for now.

But look at this! 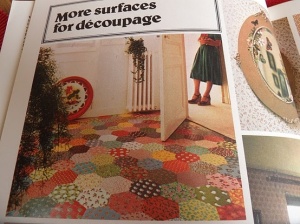 (Picture yanked from internet – no idea of its original publication)

Ok, so a floor again, but even though whatever house we’ll eventually get will eventually need to be re-sold, I’m really tempted to do something along these lines.  I don’t know if it is paper or fabric, but it would be fairly economical and a more interesting alternative to the paper bag floor (which I also sort of like, but can’t get past that leather crazy quilt jacket look of it).

But back to what I can do now, which really isn’t something I can do since I must finish other things first, but what I’m fantasizing about doing is a traditional hexagon quilt.  After a summer’s worth of basting letters for an appliqued quilt, and though at the time they often annoyed the hell of of me, I had the brilliant epiphany that a quilt can actually be as portable of a project as sock knitting.  Though that is probably obvious to all already, I’d never thought of making quilts outside of hours-long blocks of time at home.  And though my earlier thoughts of sewing a quilt by hand were along the lines of you’ve got to be f*cking joking, I now want to piece that bitch up one by one by one in airports, while visiting other people’s houses, in waiting rooms, and sprawled on the sofa while binge watching some mildly awful but addictive television series.

I haven’t decided whether or not to use my current stash and scraps or come up with something a little more uniform and floor-like, but I’ve sure as hell had fun playing with the possibilities – at least in my head, of course, since I really can’t be spending any real time on it.  (And I haven’ t yet printed off a bunch of blank hex sheets I found on this site).

I’d be remiss in not mentioning the hexing possibilities with crochet in the form of hexy granny afghans – see this Flickr group for pics – but alas, I don’t crochet.  I don’t like the looks of it sometimes, but that’s usually the maker’s fault for choosing crap acrylic yarn, or poor colors, or having no general aesthetic sense.

But I’d like to learn one of these days…

Oh yeah, and my inner jukebox plays this every time I think of the word hex: