From foot to face

I have a lot of socks – many, and the most frequently worn, are wool, and an equal number or more are cotton which I don’t wear much except the “sport” style for summer walking, more aged ones for home improvement/yard tasks, and a few decent ones for those scarce days that are too cool for bare feet but too warm for wool and perfect for thin wool (but I have the fewest of those). Most are leftover from work and my days of living without a washing machine wherein quality of life meant fewer trips to the laundromat.

But I’m getting more and more organized and for shits and giggles konmaried the whole lot. Folding*, that is – socks don’t spark much joy so I keep them until they’re 100% unwearable/unmendable so I haven’t had to buy new ones in ages, and I still appreciate the broken-down ones.

But I was left with a couple of pairs of 25+ year-old cotton and wool socks that have never quite served a purpose – too much cotton for cold outdoors activities (cotton can kill and/or loose toes), but too thick for warm ones, and not enough wool for warmth and elasticity. (The wool is the thinner grey-brown strand of the marl.)

So I finally decided to kill, rather than darn, a pair with blown-out heels.

But the yarn of the cuff felt nearly perfect still, and useful for something… 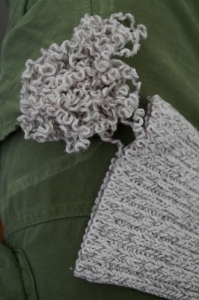 So I cut it above the worst of the heel, and it unraveled well from the bottom up. 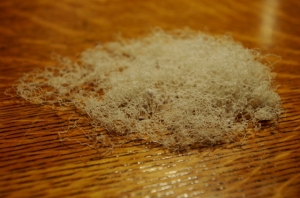 (It also had an annoying near-invisible thread of elastic that I painstakingly picked out.)

And I was left with a couple of good-sized balls of enough yards to become something.

I didn’t want it to be socks again, nor any other wearable thing, but it hit me that the blend would be perfect for washcloths/dish cloths.

The fabric ended up being better than I’d expected – lovely natural colors and good drape.

So I started on a second, and will try to salvage some yardage from the worse for wear (mostly pilled) feet for a third.

They might be too “nice” for the dishes now though…

*The folded socks ended up returning to their more fluid balled state shortly thereafter – if the drawer isn’t overstuffed, it doesn’t really matter how they go in as long as they’re paired.