I think I’ve gotten all of the post-vacation brain fog and re-adjustment whining and rambling out of my system.

I’ve spent the last week attending a training session and conference in my field, a grad school open house, and doing some networking.  I’ve been getting up at an ungodly hour to take trains to the nearby cities.  It almost felt like I was working again, but  it also made me feel lucky to work the few hours I do from home – I haven’t really seen daylight apart from a quick lunchtime walk for the last few days.  I’m a terrible commuter too – knitting, reading, and doing anything other than staring out of the window on buses and trains gives me motion sickness, so I spend the majority of the time fidgeting and stewing about how much time is being wasted.

A few posts ago, I wrote about meeting Valeria last year in Italy and buying her yarn.  And quite luckily, I was able to meet with her, and fellow fiberphile Antontella again this year.  You can read more about the Damiani Ovid and AquiLANA wool business in one of her recent posts here (Google translator is your friend).  She showed me many new yarns she’s produced this year – from delicate laceweights, to a gorgeous drapey one-ply fingering, to multiple plies in increasing weights up to bulky, and including a one-ply bulky that would probably felt/full quite well.   Luckily for her, she’s sold a good portion of the year’s stock (and for me or I’d spend myself into ruin) so I stuck to only a few skeins of the yarn in the new weights, and more of the aran/bulky I got last year in case I want to do some colorwork.

So when I say colorwork, I mean one color would be this intense lovely shade of blue – the exact color of the mountain sky. 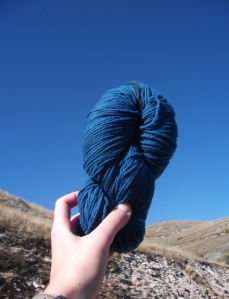 I’ve shied away from blue in the past – it’s one of those colors that I don’t like in the lightest or darkest shades, or in an “electric” form.  But it is also a color I’ve been gravitating to more and more in the past couple of years.  And I love that I have the creamy wool from the colors of the earth and sheep and now the blue wool of the sky.  Even better, the yarn is dyed naturally from Guado (Woad).

This trip was all about the blue sky – perfect weather and intense clarity day after day (at least after the first day which had an intense stormy sky that didn’t amount to much.)

And several of the alpine plants are blue too (along with the butterfly).  This one is Cardo, a thistle – perhaps also known as Sea Holly – it makes a yellow dye.

And the ubiquitous old door – I wish I had a dollar for everyone who “just loves to shoot doors.”  I like old doors too, but I’m not out to make a calendar or something.  But I saw that the faded blue paint was the same color as my new yarn and had to snap it. 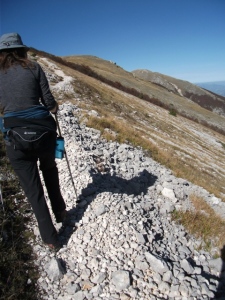 And one of my trusty water bottles and favorite wool zippered jacket/sweater thing are blue too. 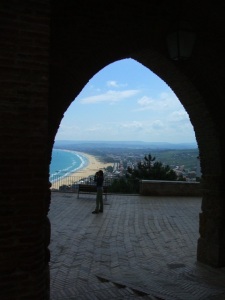 And though we haven’t seen it since our first Abruzzo trip in 2008, the Adriatic hugs the region’s eastern boundary, so the blue reminds me of the sea as well.

Valeria also showed me some gorgeous caramel colored yarn and the oak galls she used to dye it – she recently posted about it here too.  I got a couple of natural laceweight skeins with the thought of trying to dye it up myself with galls as well, though perhaps I’ll have to use black walnut since now that I’m looking for oak galls, I can’t find any – perhaps suburban pesticides keep the wasps away? 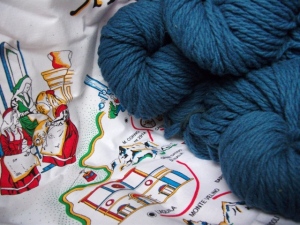 And along with the aran/bulky skeins, I’m thinking about some hats, or a shawl, or there might even be enough to eek out a short-sleeved lace pullover…

But whatever it might become, the yarn will certainly remind me of the amazing land, people, history, and animals from which it came.