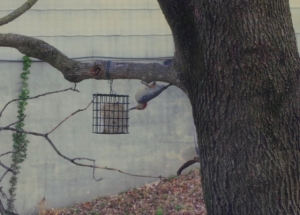 It’s been a pecker party outside the kitchen window – red bellies, downies, nuthatches- mostly policed by a downy pair.

Our house has been troublesome – hot water heater, newish refrigerator, and well parts giving up varying degrees of the ghost within a couple weeks of each other – as well as our bodies with a mild but lingering cold since just before the new year, and routine and not so routine medical tests which required healing downtime and acceptance scenarios involving amputations, but turn out normally abnormal in the end.

We’ve been thrifting and antiquing a bit more, though on weekends when crowds make it a bit more unpleasant, but perhaps improve focus and curb impulse.

We said we had enough Heywood Wakefield * in our lives, but then a decent china cabinet opportunity came up and we took it – the scale is perfect for our small but not too small dining room and overflow Fiestaware.

And I still haven’t culled my vintage china herd, but I’m rotating through it with a use it or lose it tactic.

These meat on a spit plates have been a favorite for years but I rarely use them because they are large – perfect for part of a roasted ribcage – and we tend to eat on a smaller scale. I only have three plates and two cups and saucers that don’t officially match but do, so a meal that requires a large plate and coffee cup is rare, and all I can come up with is pancakes, which we make only maybe twice a year and usually with a souvenir bag of Polly’s pancake mix from the summer before.

N has been building some built-in bookcases and doors to previously un-doored closets, so the house is becoming more our own and finally has spaces for things, but I’d gotten used to our still semi-packed minimalism, so striking the balance between delightfully interesting and my previous states of delightfully cluttered is a bit tricky. As much as I loved my previous live-in cabinet of curiosity life, it was awfully dusty and too delicate (and a grand bitch to move).

* When editing this post, I clicked on the link to make sure it was the right one – and good god, is my life so routine that every January has me shopping for vintage lamps, watching woodpeckers, and obtaining more Hey-Wake furniture?!?

Meet the rest of my sewing machines

I’m finally reunited with the two “lost” sewing machines trapped for too long in storage. 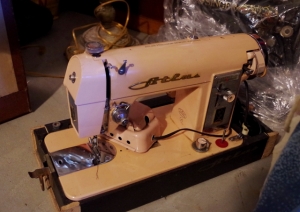 I’m a sucker for a pink Atlas – my other  one has been a favorite over the years, and this one still hasn’t gone for a test drive since the cord is cut.  I found it on garbage day (or maybe the night before) on my old street.  I can’t remember if I was late for work and trotting down the long hill to the bus, but found this and had to lug it back up and start all over again and ended up being really late, or I found it at the end of dusk slogging up the hill after a long day at work and it made my day.  Either way, I schlepped this beast up a fairly substantial hill and haven’t gotten around to rewiring it for more than a decade.

And my fuzzy memory about rescuing it from its dump fate is because I found and lugged home lots of great sh*t on that street – including an old metal headboard from one of those old long narrow beds that prompted the comment by a passerby, “Do you always carry your bed with you?”  And I believed I said yes, I’m very tired.  But I don’t know what happened to that – I think it was a casualty in the move from that place…

And this Singer hasn’t had much love – I’m pretty sure it’s a 66, and maybe I already had that 99 and got this thinking it was the same and I could use it for parts?  All I know was it was an early thrift find and I don’t remember if it works now, and maybe I’ll part with it eventually.

So I am done buying old sewing machines… unless I find one that has stitch functions I don’t have, is non-electrically operated (like a treadle in a lovely cabinet), or something that is uniquely and fantastically awesome – and all must be for a great price and reasonably sound condition.  So, I’m really not in the market for them anymore unless I find something truly special.  And that’s a problem.  I wasn’t looking for a zig-zag machine a few weeks ago because I had been looking for the last 15 years or so and gave up – then, presto!

This lovely beast followed me home.

My current localish thrift is pretty decent – not a lot of vintage stuff, but good prices – I got this for $12.99.

Not sure what the inked-on “W” marks or means – hopefully wonderful or wondrous or woo hoo or wildly fantastic or wicked good or woot or wow, and not wonky or wah or wacky or whoops or whoop-de-doo…

I’m also not sure if and how well it works yet, but the needle goes up and down which is the most crucial part.  So as long as I can get this up and running, and if I ever get around putting a hand crank on one of my others, then I’m really not in the market for another, right?  (Really, I’m not trying to jinx myself for the better, I don’t want more heavy old things).

I’ve never owned a new, or less than 40-years-old, sewing machine but I’ve been wanting a serger for some time.  I never felt I had a right (or the money) to buy one since I wanted it for making napkins and small bags and such, and those things can be made with any machine, just with folding and ironing added to the mix.  But I wanted to take out folding and ironing, and in some cases, preserve as many millimeters of the fabric as I could, so I asked for and received this for my last “big” birthday – thank you mom & dad!

I took it out for a test run a bit ago, and it’s going to be fun and quite useful, but like the others, it’s waiting patiently and safely until I get its room in shape, and more importantly, I find the damn bolts and wing nuts for the tables to put it on.

So it’s even more fitting that my last find was a New Home/Janome to go with my new serger – hopefully it will teach its younger sibling lessons in durability and perseverance.