Tag Archives: put a bird on it

I hate most fabric marketed to babies, or rather their keepers, since perhaps babies would really just like giant boob prints, but most of it is just pathetic and timid, too cartoonish, sometimes oddly and vaguely religious, too pale and sickly pastel, and just plain ugly (however I do like some vintage baby prints).

But this one caught my eye a bit ago, and I knew about an upcoming wee one that needed a sewn item. 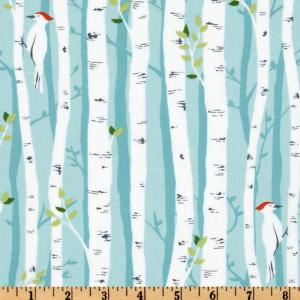 I don’t make many things for babies now – at first I made many things because I only knew one.  Then more people started having them, and then the first one got a sibling, and I couldn’t keep up, or the charm wore off, or they started to blur together in a drooling blob and I couldn’t remember what I’d made and for whom.

(My apologies to all of those second children out there.)

So I whipped up a little quilt for the wall, but it could still be used as a quilt.  I had a grand idea of massive three dimensional applique with crazy depth and perspective, but in the end I kept it simple – a bit of applique birds and leaves and machine quilting. 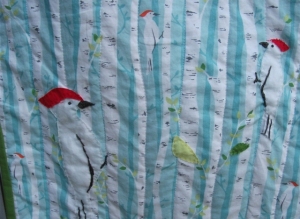 But the paint is drying in my new studio room at the moment, and next will be a freshly sealed floor (and then it has to become the bedroom for a while while I work on that room) and then I’ll be able to unpack allllllll of my sewing things!  So I see that day not so far off in the distance now.

But back to woodpeckers – I’m a fan of them.

And their rat-tat-tat drilling (as long as it isn’t the house).

And though I don’t like that they damaged our lovely Magnolia, I’m fascinated by the pattern that they made – almost as if the tree had ripped out stitches…

Maybe the yard is run by Woodi Peccaroni, the ancient don of the fermented tree sap bootlegging era…