Curse of the redwood roving

I buy economical roving seconds from an American yarn company – I could name the company and my source, but I don’t want to give away what I feel is my own personal secret stash that I don’t actually own.   The roving is easy to spin, comes in some nice colors, and makes a durable yarn.  I haven’t had much desire for spinning a solid-colored yarn since I want my yarn to look handspun and unique, so I usually blend colors.  I have a background in art, I am good at picking out pleasing paint palettes for rooms, and I am in no way colorblind or challenged, though I do like some challenging colors.  I bought a pound of what appeared to be a soft, slightly dirty red, the warm color of redwood and the innards of cedar.  When it arrived, I was pleased, and it was the pleasant not-too-reddish hue I hoped it to be.  However, whenever I put it with other colors, it turns a nasty raspberry – I have nothing against raspberries, I like raspberry sorbet, not berets, unless it’s a song, but I don’t really like the song either, just the artist, well, sort of but really, in the past maybe, but I don’t like that part of the past very much… So yeah, raspberry reminds me of the 1980s, and those being my years of middle school and other childhood angst and trauma of being a geek in a backassward rural town, I’d rather not go there again.

I figured this first glimpse of the evil that this raspberry roving becomes is my my fault entirely.

I don’t know what I was thinking, but I think I was thinking of the American Southwest – turquoise in a desert sunset or something stupid.  I stopped spinning when I knew it was clearly awful. 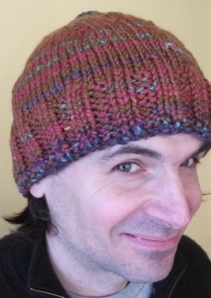 My mom needed a birthday present, and she had some purplish fuchsiaish eyeglasses that I thought would go with the yarn, so I whipped up a hat.  A hat only a mother could love… but this isn’t some stupid crayon drawing that can be ignored until something conveniently spills on it, so I don’t think she wears it much, and wouldn’t model it, but N is a good sport.  The hat is warm, and though the pattern was improvised, I jotted down the recipe for future bulky handspun use, so at least it had purpose.

A few months later, I bought some gorgeous hand-painted roving from Scarlet Fleece at my then LYS in a colorway called “easter egg.”  To me, it was all of the lovely colors of autumn, so I’m not sure what they were going for in the name, but the gorgeous colors were the important thing.  I wanted to make a small shawl from it, but only had four ounces, which could have been just barely enough, but I wanted more, I wanted bigger.  Enter the bastard redwood. 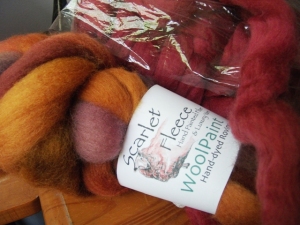 This picture really does show it being a bit berry, but trust me, I didn’t photograph it well, and see the reddish tone in the multicolored roving on the left end?  Yeah, it does match.  My other choices for blends were a saffron yellow that seemed a little too bright, and a coppery brown (see hat above) that brought it down into dinginess.  All my little samples and tests in indoor and outdoor light led me to believe the redwood would be the perfect match, so I went with it, and kept going with it even though I could see it was an utter mistake after plying the first few yards…

So, now I know I suck at color when it comes to spinning and I ruined the perfect subtle warms oranges in the other roving.  It is raspberries with lemons and grapes.  Hello 1980s, hello fugly-ass yarn. It looks like one of those vomitous swirly lollipops.