Knight of the Deep

The Noble Hero balaclava pattern by Annie Watts of Wattsolak has just been released!

Last year I test knit this fun to knit, and to wear pattern.

I finished it while on a bizarre early summer week-long vacation in the White Mountains that started off with a snowstorm and ended with temperatures in the high 90Fs, so it was too icy and cold to hike in the beginning, and too hot and humid by the end.

But it gave me more knitting time.

Though it would compliment and complete your awesome new space suit, I thought it also looked like a knight’s chainmail coif: 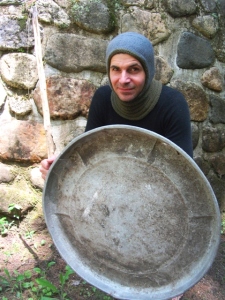 Or a deep-sea diver’s helmet:

Either way, I really enjoyed knitting the piece, learned a new technique, and N has taken it and enjoys wearing it, so I’ll have to make another for myself!

The pattern is well-written and was very clear even in the testing stage.  I had gauge and made no modifications.  The only thing I’ll keep in mind for next time is to loosen up on the applied icord, or go up a needle size for it – I learned how to do it on this project and I started out a little too tight.

This was also my first time knitting with Quince & Co., and I liked it – I chose these muted colors because I’d love to have a larger garment made from one of them at some point, and wanted to see the colors in person.

Now to think of colors for a Noble Hero for myself – perhaps handspun…?

Of veggie weenies and small epiphanies

The growing season has ended for my mutant anthropomorphic vegetable friends.

I’ve been struggling with that large quilt since the summer.

Though I thankfully received some helpful suggestions on how to finish it in my limited workspace, I still didn’t want to deal with it.  But then I had a head-smacking moment when I realized it didn’t have to be a quilt.  I wanted it to be a functional bed covering to fully realize its concept, but it made no difference whether it was a quilt, or a coverlet, or a comforter, or a duvet cover.  I am loudly sighing with relief.  Though I also went to 13 stores (even thrifts) trying to find a cheap comforter that I could use as filler instead of spending an ungodly amount on 4 or 5 layers of high-loft batting and failed to find one in my budget.  So duvet cover it became out of thrift, necessity, and for the sake of my sanity.

My vacation knitting socks are further along, and might even conclude by the end of the year.

I’ve gathered some acorns to use as dye (still no luck finding a tree infested with galls).

While I was in the woods, I saw several really cool vine yarns.

And I’ve started a couple of gifts for upcoming birthdays and holidays. 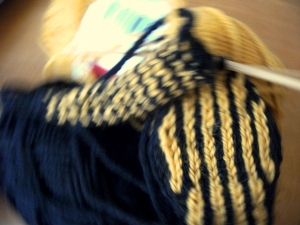 But thankfully I do not fully participate in most holidays apart from cooking and eating (mostly just the eating) so I have none of the pressure that others do to complete x projects in x time for people who might not want/like that hat, pair of socks, scarf, pillow, toy anyway.

As some may say, woot!

Or the excitement is so short-lived it will be over by the time I finish shouting.

Back to the woods…

We were in the Adirondacks last weekend for a couple of days of soggy hiking and down time away from our frustrating and increasingly desperate home (and my job) search. 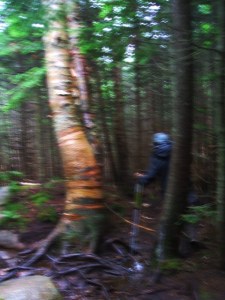 I know that I said earlier that I needed another bout of cabin time to finish designing that shawl but I have to focus on other projects at the moment now.  I took all of the letters I need to cut out and baste for my newest quilt (I think there are 26 total) but I only managed to finish a whopping four.  Pretty lousy progress.  And I’m not entirely sure I’m doing them right or how to handle some of the narrow slices that I really can’t fold down. 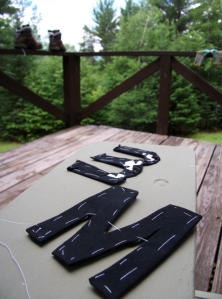 So I easily got distracted since basting is tiresome to me and doesn’t seem to amount to much since I still have to sew the damn things on.  In my current overwhelmed and distracted state I forgot to pack socks for the weekend. It was a good excuse to buy a new woolen pair, though I could only justify the one and had to wash them after every hike and hoped they’d dry enough for the next time.  Our cabin was infested with carpenter ants and chasing after one to photograph it was a perfect basting procrastination activity.  Do you realize how hard it is to get a clear shot of a very busy (and harassed) little ant? 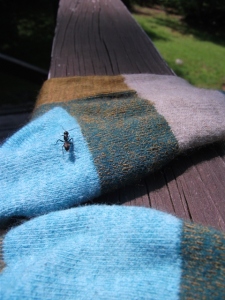 Bugs were definitely showing off their strengths over the weekend.   Inexplicably, black flies were suddenly crazy about my eyebrows  and one little f*cker bit me so successfully that blood was shed on my favorite wool t-shirt. 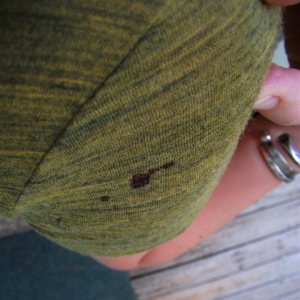 But the weekend also held one of those magical and rare summer afternoons when all that mattered was swimming in a mountain pond and feeling the sun.

(Thanks to N’s family for their hospitality and the afternoon at their awesome lakeside cottage on Sunday!)

And since we were away, I had a late start in the Tour de Fleece, and promptly suffered a wipe out when I sliced open my thumb on a yogurt container of all things. 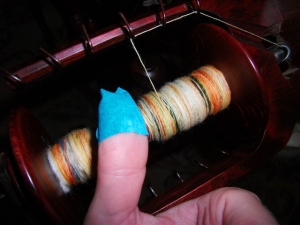 I need my thumb to spin dammit!  I should probably lower my yardage expectations now but I’m willing myself to heal quickly.

We spent a much extended holiday weekend (turned week and a half) in the White Mountains last week.  N is hiking all of the “4,000 Footers” and I am choosing a few as well, but preferring to collect mountain ponds and the smaller lesser-trod peaks and loops.  On the few days when he’s up at an ungodly hour to hit the trail solo, I’m groggily but happily thinking about my chunk of knitting time free of any electronic, human, or stuff distractions.  We usually rent cabins when we go to the woods and hunker in among the trees, only going out to hike or get ice cream and this time was no different, though we encountered extreme plan-changing weather and were greatly distracted by plagues of bloodthirsty mosquitoes.

The only times when I’m truly and massively productive is when I have the ability to only work on a handful of things and I’m in a quiet place, save for bird yells and other nature song.  So spinning wheels, sewing machines, computers, phones (I don’t even have a “smart” one to begin with) and boxes of neat sh*t stay at home and I just bring along some balls and needles.  Good times.  I’ve been sweating over a shawl that I’ve been trying to design (more in a future post) and have been trumped several times over by reversing the pattern and some simple math for increasing and decreasing.  I just can’t get my brain to have an ‘aha’ on this one, but I finally worked out the left and right main portions and just need to figure out the ends and center now, but I might need yet another week in a sylvan sequester to finally conquer it. 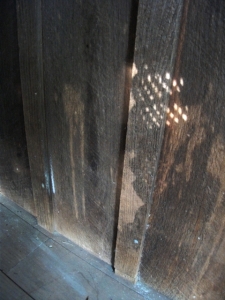 Here is a shadow tease of some sample bits in worsted.  It isn’t earth shatteringly different or unique, but I haven’t found anything quite like it yet out there, so I’d like to offer the pattern for sale at some point, or at least get the whole damn thing worked out so I can knit it in the special yarn for which I’m itching to work. 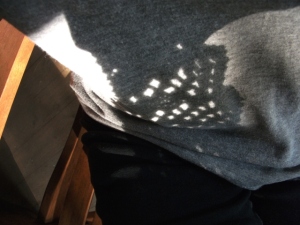 Part of the time we were there was downright frigid so I took my favorite old cardigan.  I patched the elbow hole with a mini-skein of Pigeonroof Studios handspun.  I love the colorway but don’t know what it is.  The patch is a little heavy for the thin sweater and looks a little bit like an eyeball, but it is a comfy cup for my elbow. 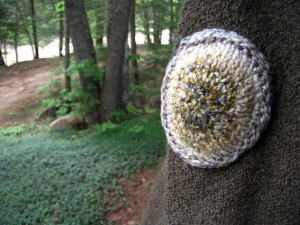 I also finished a test knit that I love from a designer who makes fabulously fun patterns but it will not be released until next year.  I used Quince & Co. yarn for the first time which I’ll go into further in next the post.  N and I had a fun photo shoot with it utilizing the river and the the cellar’s stone wall.  In addition, I brought part of the cotton blanket and my latest Lacy Baktus along, but didn’t work much on either one.  The power went out on our last night there, so I was able to do a couple of feet of a blanket strip in the dimness since it was white.  While making the test knit, I learned to do applied/attached icord, so now it is a consideration for trimming the blanket – it will depend if I end up wanting a couple more inches of border or not.

But most of the time was spent on the trail.  We had to cancel our hut reservations for the first two days due to total white-out of freezing fog and snow.  When we finally got out, it was a slippery sloshy wet cold mess and made for some hiking misery on my soggy-ass part since I lacked good/newer waterproof gear (N thankfully hooked me up with a new jacket later on).  The first hike was up Mt. Hale and luckily the sun had returned, but you don’t see the bitter winds (or my bad attitude from having clumps of wet snow eggs plomping down from the trees and onto my head, down my neck, and penetrating my duds – I was wearing wool of course, so hypothermia was kept at bay despite the soaking). 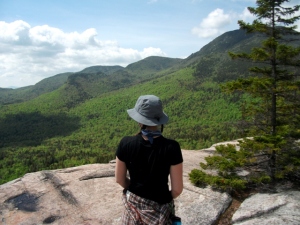 But in just a day or so the weather turned gorgeous and we had a lovely time on Hedgehog Mountain, but then the next day the weather became stranglingly humid and sweltering in the 90s, and hiking became soggy again – this time from the inside out.  After that, I preferred to put the needles down and just sit in the cold river right outside our door.