The boyfriend shirt quilt.  I don’t have a good reason for why I never finished this, or why it barely got started for that matter.  When N bought the house, he had a window of time where the lease on his apartment ended before the closing on the new place, so he moved to my tiny weird but wonderful apartment.  In his last days before moving in with me, he tossed out half of his wardrobe (mostly over-sized 90s clothes) in a frantic windmill action – as he tossed, however, I snatched up.  He was irritated, my apartment was already crammed, so why did I want to make it worse?  I reassured him that it would turn into a nice quilt that he would have as a housewarming gift.  I was already in the middle of making a quilt for my nephew, so I didn’t start on it right away.  Then I began to enjoy N’s cooking more and more so I didn’t get out the sewing machine/s as often since I had to use the dining table that was previously minimally used.  Then the newly purchased house need work, a lot of work, so we spent the next year sanding, staining, tiling, painting, reconstructing, digging, and whatnot so I don’t think I sewed at stitch of anything.   Then I moved out of said apartment into the house and everything got boxed up and banished to the basement.  Eventually, I dragged everything out and up to my newly restored third floor studio.  I opened the beer box that held the shirts, cut up and ironed them, then made one patch and sort of started another. 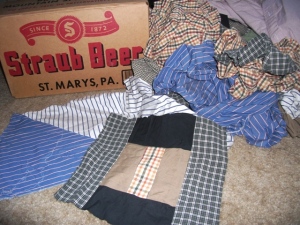 Then what happened?  I know there was still work to do on the house and much to do with the yard, but I still had time in the evenings…  but I think my knitting obsession was taking off, then I was producing other things for craft fairs.  And then N took a job across the state but we kept the house with me in it.  I thought about making the quilt again for him to use in his new depressing apartment, but we were always traveling to see each other on weekends, so there never seemed to be any time.  Now I am here with him, so it’s time I made this quilt!  I started on a few scraps and will continue with my usual hodge-podge style. 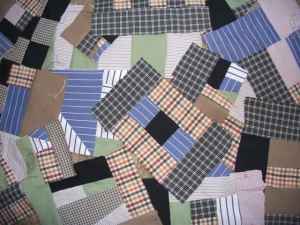 I’m not sure if I have enough for a queen size, but if I need to augment, I’d like to thrift a few shirts that at least look like ones he had before or have now.  I really should give myself a deadline.