I was in a few states of the great American Southwest for the last couple of weeks.  I hiked, visited family, ate lots of green chile, visited Tierra Wools (more on that another time), and I had greatly desired to spend some time with a cashmere rancher friend of my mother’s, but sadly got sick and spent the last four days of my trip in bed, waiting for hours in feverish chills at a busy clinic full of babies with diarrhea, or lurking about the cold house feeling too crappy to knit (I took along that blasted sock) and without anything new to read (not to mention no internet or boob-tube).

I love New Mexico – it is a hard place to live, and I respect that – I would love to call it home, but will enjoy it in visits instead.  The land, or more precisely water, can’t really handle any more residents – especially those who plunk a large vacation or retirement home down on pristine but dry land and expect to live like they did in the East or South.

Luckily in the days leading up to my assault by poison mucus on ears and sinuses, the weather was gorgeous.  Mountain meadows are my favorite places on the planet…

…as well as dramatic rocks and moonscapes on earth. 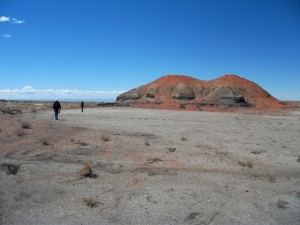 And luckily a couple of my sick days involved wind, sleet, snow and rain so I didn’t feel as bummed about not being able to hike otherwise.

But I admit, I was most excited about meeting Nestor.

He’s a guard llama on the cashmere ranch (you can see one of his inquisitive charges in the background).   I did get to meet him briefly, as well as the resident Maremma sheepdog Homer… 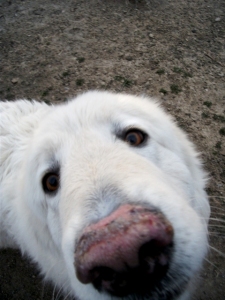 He’s a fiber producer in his own right and a giant friendly (though not when protecting) beast.  I’ve been interested in the breed since seeing them in Abruzzo, Italy a few years ago (more on that later too) so it was nice to finally meet one and rub his thick coat.  Alas he is the only four-legged furry there I snapped since I thought I would be returning, but the pictures of Nestor as a younger man are courtesy of my mom from an earlier time.

She brought back a baggie of Nestor a few years ago – maybe it was an ounce or two.  That, along with some Navajo Churro was my first time dealing with unprocessed fiber.  I didn’t have any carders or combs at the time so I fluffed out the fibers by hand the best I could.

This was also among my first spinnings on my new-to-me-then wheel.  I think it is about a sport to worsted weight and I didn’t get much – I think I was going to make it into wrist warmers, or very short mitts.  I also wasn’t sure if I wanted to knit it with some wool yarn for better memory and elasticity. 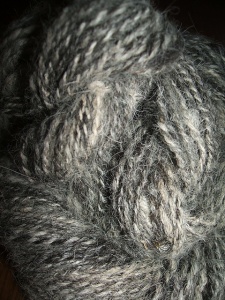 But then as with many things, I didn’t decide about it right away and time passed.  The following year my mother called up to ask if I wanted a big Nestor load?

Of course I said YES.

This was back in the days when I had a glorious basement and the harvest gold dryer that came with the house.  It was also winter, or maybe just cold and damp outside when I set out to wash him.  Luckily we replaced the windows in the house too so we had several old screens that were perfect for dealing with wet fiber.  I think he finally finished drying a week later.  Then it happened again – I sat on it.  My dilemma is either spinning it all at random like my initial batch for a marled color, or roughly separating out two or maybe three colorways – white/light grey, grey, grey-black and then have the option of doing color work or stripes with the knitting.  I need to re-weigh it too, so I’m not quite sure how much I have, and then I may waffle again about adding wool during the spinning or later with the knitting….

My ears nearly exploded on the flight home, and by the way the assholes at United aren’t “allowed” to give you the cups with warm paper towels in them anymore – if both of my hands weren’t clamped tightly over my ears at the time, they probably would have gone to the sneering flight attendant’s neck.  Needless to say I’m now even harder of hearing and slogging along with more and stronger meds and the thought of watching the spinning wheel go round and round isn’t going to happen for the next 10 days or so, so Nestor will have to wait some more.

3 responses to “Fiber travels in New Mexico, part I”