I am [no longer] a statistic… 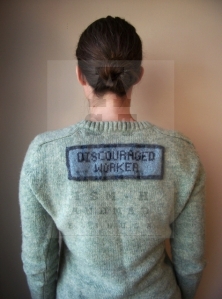 At first I thought I may have been discriminated against for being in my perceived peak baby-making years, but now I’ve made it to the legal category for age discrimination…

Now I hear of vocal fry as a potential reason for not being hired.

My voice doesn’t have that horrid affected one, but due to drippy sinuses and out of control GERD, I definitely sound a bit like I gargle with gravel.

(No one is pointing out that it is also possibly overcompensating for the horrid habit of up-talking in women – I’d rather hear the fry than the question that isn’t.)

I have to blame my failure to be hired on something because being a run of the mill loser is just too depressing.

I’m now in the uncounted/uncountable “discouraged worker” category of job seekers.  Though I’m (at the moment) working  nearly the limit of part-time hours, my telecommuting job is tenuous, ill-defined, and I receive absolutely no benefits.  I have been looking for a better job (in terms of stability and full-time hours for a few years now, but I love what I do now probably more than anything out there).  Now I’m only applying to those things directly in my field rather than the tangential reaches (and wastes of everyone’s time) I formerly applied to to satisfy my quota for partial unemployment (that ran out nearly two years ago anyway).

A weird thing happened during the length of my career wherein it became hip to be a geek, and thus my field was, and is, flooded with brainiacs real and imagined.

A career is not hip in itself.

A career is not trendy.

Please step aside if you just really wanted to be an investment banker but were too ashamed to admit it.  It’s okay, you can cover up your tats with your power suit and your asymmetrical hairdo will grow in.

(And I must finally and shamefully fess up that I did not get into a MFA program after working my ass off on a portfolio in the year before we moved.  Looking back, I understand – several of the pieces were weak, and should have been weeded out had I been working on the subject longer and thought things out more, but going back to school is about thinking things out more, isn’t it?)

And did I use up all of my luck when I got in (and received healthy scholarships) to all of my previous applied-to programs?

What about when I turned down that awesome and utterly stable job at that internationally recognized place eight or so years ago – did that damn me forever to failure?  (Especially since the only reason I didn’t take it was because what would have been my office didn’t have a window…)

So I hang my fried greying loser head in shame, and plod on wondering if I need to go through that whole reinventing myself bullshit…