While I was trying to get my mojo back last week, I was working on a few other things that I hoped were likely to turn out as I expected.

I made a big mess of these Botanic hats recently and was left with one that was a bit on the smaller side.

I know a kid who likes yellow, and his father was one of the recipients of the recent ones, so rather than knit yet another (and buy more yarn which I’m really trying not to do) I got some Wilton’s buttercup yellow food coloring for transformation purposes. 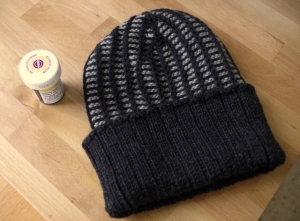 The yarn is superwash, so I went to town without worry, glopping in about a quarter of a teaspoon of color to a liter or so of not quite boiling water and dumping in the room temperature vinegar and water pre-soaked hat.

And as usual, the whole process was already underway before I considered gloves….

I was expecting to have to use more and more color, but the little bit did the trick.

I’d love to dye more often but I hate how much water it takes to rinse… I suppose water tainted with food coloring would be safe to use watering plants and whatnot, but I don’t want to dye my plants, and I don’t eat anything with artificial food coloring, so I don’t want it on my vegetables…

And whether it was from the vinegar rinses or hot water baths, it has become wonderfully soft. 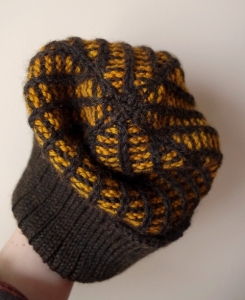 I think it is my favorite version of this hat yet.