I don’t like wearing tank tops in public – I feel too naked – and our garden is on the side lot facing the street, so it is a bit too public once the neighbors and walkers are out and about.

But I also don’t like tan lines on my arms – a rare petty personal pet peeve of mine.

So I decided to increase my almost-but-not-quite-tank sleeveless shirt pile – now I have 3, and yes, they’re all in the wash, so I’d like to make a few more…

The last time I went a’thrifting, I picked up a couple of thin, lightweight, close-fitting but not too tight, long-sleeved t-shirts for a buck or less for the purpose of desleeving before I started chopping up shirts I already have in case it was an utter failure.

I used that shirt I overdyed last year (that hasn’t faded as much as I thought it would) as a guide for cutting the neck depth of the one to be deturtled. 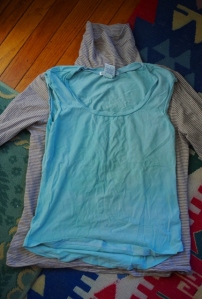 And stitched up the bagginess at the armhole with an ad hoc bust dart. 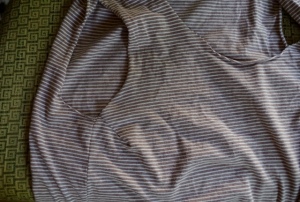 And I have to say, the fit is good – maximum sunage with minimal neckedness – and the fabric (though evil and mass-produced likely in a sweatshop) is comfortable.

I didn’t finish the edges, and I don’t think I will – they roll slightly and it looks intentional. 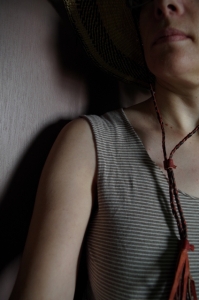 And I realized the cut off sleeves (with pit width reduced and stitched up) would make perfect bean rash guards. 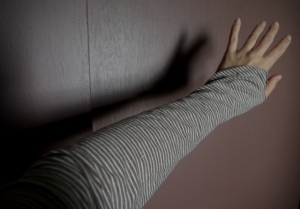 They just look a bit silly when worn together, and they’re not perfect – the knit fabric snags the little bean prickles a bit more than the old man’s woven long-sleeved shirt I usually wear (the shirt is a button-down meant for a man and many years old, not a shirt off an old man’s back) but I can wad up these sleeves and leave them in a handy spot whereas the shirt is often on walkabout…

The turtle became a headband. 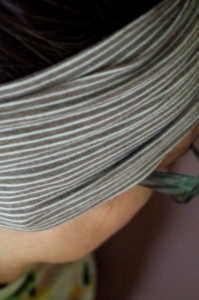 And the moon sliver left of the upper chest became an impromptu hair tie but will eventually make its way to the garden.

The second shirt was a tighter fit, so no sewing was necessary, only satisfied snipping.

And I’m left with a spare pair of beansleeves and more needed plant ties.

I’m starting to think that none of my old favorite, but slightly too tight, t-shirts will be safe from the snipping now…