(I’m sick over this election bullshit and low maddening hum of misogyny like a high voltage wire stretching over the continent here, so let’s stick with some light “lunching ladies” garden talk for now…)

The garden broke me this year – there wasn’t a single plant (except the hot peppers) that wasn’t hit with disease, multiple diseases, and pests – even the fresh dirt in the new raised beds now harbors various evils.

There was some balance – some of the new pests attracted some new predators – but not enough, and/or not in time and I’m going to have to be even more proactive next year with using more or other organic interventions.

The fall crops mostly failed from no rain and continued heat through September, but a few sprouts are gamely hanging on, and the poor embattled (nearly zombie) tomatoes are desperately trying to ripen their very last fruit.

We had a few more butternuts than last year, but not enough for the work we put into them to keep them alive, and my experiments with letting some volunteer plants grow failed miserably since they were a month or more behind and maturing at the height of pest season. 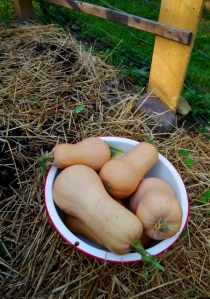 Google took new satellite images of our town and our garden can be seen from space! Near space, that is, and luckily it was captured after a fresh batch of straw in the aisles and before the plants got big, so there’s good contrast.

The new garlic is now in, and the old garlic is already half consumed – unfortunately we’re definitely not going to make it until next year’s crop.

And the canning is finally wrapped up – just tomatoes in various consistencies, jalapeno salsa, and a tiny batch of overly sweet hot pepper jelly. The rest of the bounty is tucked away in the new chest freezer. I experimented with blanching or not with a few things, so we’ll see what worked best, and anything too mushy to eat is heartily consumed by the canine, so it’s not a total loss.

Now starts the month or two of raking and shredding leaves…

(And a heads up that I agreed to put “a subtle message” urging Americans to register to vote in my posts, so if you see it, it should be there, and please vote unless you like Trump or any of the other election-throwing candidates, then please stay home.)