I still haven’t settled on the next new big knitting project, though vests and ponchos and cabled sweaters are in the queue – part of it is my insistence on finishing up a sweater that I’ve procrastinated on for months, but most of it is that I don’t have, or don’t know when I’ll have some good chunks of daylight knitting time to get over the humps of understanding and executing a new-to-me pattern’s fiddly bits.

A new Rosa’s Caponcho was on my needles for a couple of evenings, but the yarn didn’t have enough drape – I think – I may put on another row or two before frogging it, but I’m pretty sure I want to start it again with some as-yet-to-be-spun yarn, or unraveled stuff (or yet-to-be-unraveled stuff). There are a few things in the stash that might be good as well, but the one with the best drape seems pretty sheddy and light colored, so that would probably be a mistake in the end…

So I’ve been putting rows on the small and easy traveling projects while at home here and there instead.

An eight-hour flight delay turned the mesh test scarf into a thing that is now the circumference of my neck.

I'm saying that that one bigger hole isn't going to bug me in the end, but… #knitting #knittingmistakes #scarf #mesh #frogsback

I’m not sure if this was the best mesh pattern to use – I wanted one with character that stretched and retreated, but I keep seeing other patterns that I wished I’d started that are a more stationary fishnet, but whatever, this one doesn’t have any p3togs or other awkward-for-me maneuvers. However it’s not great for bleary eyes – I managed to catch most of my mistakes, but one made it through so far, and the slick and variegated yarn will make repairs at the end a bit more difficult. And lifelines might be a good idea – I’m too cocky/lazy to do them lately, and I’ve tinked back without drama several times on this one since it’s only a 2 row repeat, but I might be pressing my luck….

I thought I hated mesh – several years ago I slogged through a Midwest Moonlight scarf and it’s been the only knit that I remember actively hating the entire time – I kept being plagued by one dropped or accidentally knitted together stitch, and wouldn’t immediately realize that the whole thing was thrown off until a row or two later. But lifelines saved me in the end, and this was probably the last project I did on straight needles, so I was still figuring shit out. 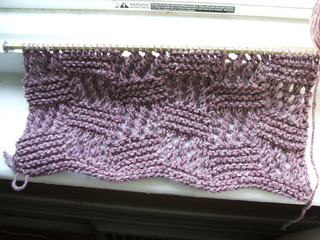 I still wear it too – the yarn is cotton and wool, so it also sucked to knit for that reason too, but it’s good to wear in the shoulder seasons. And I’d recommend the pattern – it’s very easy, though if I had to do it again, I’d go with a bulkier/chunkier yarn so I wouldn’t have to keep at it as long.

And I have been re-evaluating the rectangular scarf lately – I swore them off for knitting, I don’t wear them as much as my side-to-side triangles, but I what, miss them? They seem to have fallen out of favor, but I’ve been looking at them again. I used to have a fairly intense yoga practice and the instructors were always repeating that the positions you hate now might be the ones you love later. Though I never learned to love the ones that always made my toes pop out of joint, I do feel that I’ve come around to mesh (especially after this) and back to rectangular scarves in a similar way.

And socks, how could I have been so lukewarm about socks a few weeks ago?

I do kinda sorta have enough, but fuck it, I should always have a sock on the needles. It’s comfort knitting- it’s mostly brainless, somewhat sightless, and something comes of it relatively quickly, though I have no issue with a pair taking a year or more if only knit on occasionally.

No new pictures because it is the same only a few inches longer. It’s a blast to knit in an endless meditative spiral slide kind of way-

weeeeeeeee around and around we go…

But suddenly I wanted more pattern.

I also remembered I wanted to make a big mosaic tube, but then I remembered I wanted simple, and while my memories duke it out, that one is sidelined now. (I could mix it up with various patterns, but I’d have to jigger the stitch counts and the stranding or slipping would probably be tighter than the striping, and I wanted something simple and nondescript, right…?)

So perhaps I’ll have some socks by the year’s end, instead of next like I’d originally thought, and hopefully I’ll have that silky mesh thing for spring (unless the long rectangle becomes beastly again…)

One response to “Small and easy status report”