Can do vs want to

Last year’s spring was a bit rough – job woes, future angst, and a new dog who was a bigger challenge than I was ready for – and then to top it off, I did a cement-surface face plant and broke my glasses.

(The dog was somewhat involved in the accident, though it wasn’t his fault). 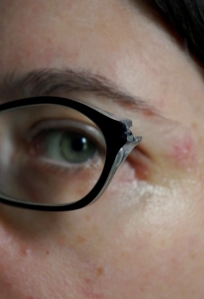 (I was so bummed at the time, I forgot to shoot the gnarliest stage of the black eye…)

I bought the glasses only a year or so before – they were a special-order, handmade in the USA, souped-up lenses (my vision is pretty bad) pair, and were a bit over my budget, but I figured on having them around at least 5 years. I’ve broken glasses before as a kid (when the glass was actually glass) but never to the extent I couldn’t repair myself as an adult. It was oddly devastating. And it was the only pair of glasses (apart from sunnies) that I had – in my better financial years I had two daily pairs to choose between, usually black frames and a brown or green – so it was the icing on the shitcake that my one and only was no more.

Wearing the broken pair was pathetic, and the second arm is really quite necessary for functionality, so I had to get a new pair immediately. I went to the local place figuring on needing to return at least once for a better fitting and not wanting to have to schlep to the crazy congested places if I didn’t need to. The local optometrist insisted on a different prescription than what the local ophthalmologist had given me – I’m sure it had to do with a small-town ocular feud of sorts because I still can’t see as well as I’d like, though it’s too vague to figure out. And then I wanted the boring black pair of frames but the sales guy insisted that I needed something more interesting and I hated that I couldn’t get both, because I like to be boring at times and wanted a choice, but out of fuck-it frustration, I got the colorful pair.

And in an attempt to cheer myself up over the whole deal, I bought a sewing kit for a dress that seemed simple enough and okay for my shape. It was on sale to the extent that the pattern and fabric were cheaper than if I’d bought the fabric alone.

And the fabric matched my new eyeglasses.

I’m not sure how I feel about kits and online classes and such – it’s good that they exist, but mostly not for me – YouTube has been my knitting tutor at times, but I need real people and things for real schoolin’. I’m also not a fan of trendy anything, so I was hesitant about getting a fabric pattern that had shown itself on social media a bit and was now “outdated.” 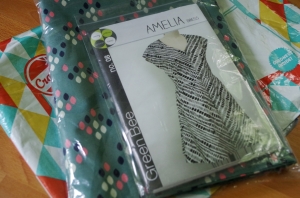 But of course, I didn’t get around to sewing it – last year was what, busy? My head and/or heart wasn’t up for it? (Not that I need “passion” to sew, I just needed to not have a coronary).

But this summer I wished I had a cottony dress or two, and I’ve got some other great fabric (that doesn’t match my glasses) in my stash that’s been waiting for years (decade?) to become a couple of dresses and skirts.

I had a weekend to myself mid-summer and spent an early morning tracing out this pattern and printing and cutting out a couple of skirt patterns. And I was lazy or stupid to do it on the living room floor rather than the freshly-cleared-for-this-purpose library table in the basement, so things might be a bit wonky from tracing on the plush rug and all tape has dog hair stuck to it – he was not helpful at all during the process…

And then I waffled passed golden to nearly burnt on whether to make a muslin out of well, muslin, or stash fabric I didn’t like, or the fabric that came in the kit that I decided I didn’t like that much after all (it’s pretty thin). I figured if it ended up fitting – in the sense that it wasn’t too small and covered my body, it could at least be a bathing suit cover up.

So I decided to go with the kit fabric as a wearable muslin and cut a size that seemed slightly more, but not too much, more than my actual measurements,* and gave myself another couple of inches of length at the bodice, then dutifully serged all of the raw edges. 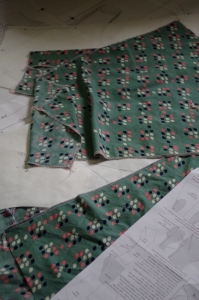 Then I sewed the bust dart.

Then I ripped out the bust dart.**

Then it was a messy heap on my tiny fiber room floor for a couple of weeks.

I know I am a weird size, and I always have a hard time finding clothes – SO OF COURSE that means patterns will make clothes that don’t fit well either. And this is the reason I need to be able to make my own clothes, because everything in my closet could be near perfect-fitting if I made them with my own customizations, but on one hand I don’t know how to tweak stuff in the right way, and on the other I can’t be bothered to.

For me, making clothes is the equivalent (sorta) of tiling a bathroom – I can do it, but certain circumstances (the measuring) stresses me the fuck out, and then I don’t want to do it, and then I really don’t want to do it, then I loose sleep thinking about doing it, and then there is a trigger/siren/smack of utter necessity that makes me finally do it, and it’s fine – sometimes pretty good – but so far always good enough and well worth the few hundreds/thousands in savings.

But I don’t need that stress over a dress – I should go back to making a couple of skirts – from the pattern I’ve made before, not a new one.

(And the dress pieces are off the floor, and I’ve forgotten where I’ve stashed them already, and my now year and 1/2ish old glasses are pretty scratched up…)

*My usual mistake is to sew something way too big and then spend more time taking it in.

**I can probably still save it to a degree – the pattern is made for neat, top-shelf titties, and mine are bottom of the barrel, lying on the barroom floor – but the bodice is still too short – and yes, I read all about full bust adjustments online, but it just doesn’t stick…

2 responses to “Can do vs want to”