Does the feeling of impending unlimited leisure time with the start of summer (that was had only as a very small child) ever go away? It’s this time of year from which I have to clean-up, catch up, and be burdened by (to a degree) unfinished projects for the rest of the year. I cast on several knitting projects with the excuse that: I’ll have vacation knitting time and don’t want to run out of projects (I never do because I’ll only have like 2, maybe 3 days of vacation where I’m not doing something else), I’ll have long evenings of natural light (I do but I can’t knit for any longer than if I didn’t), I’ll have undistracted time to knock out something more complicated (I sort of do, but never enough for anything larger than a hat), and I need a few mindless things on different needle sizes so I don’t have to pay attention to my hands (these are most of my projects these days).

Summer hasn’t meant significant leisure for nearly 4 decades now, but I still acquire a large number of paperbacks and projects – the books are usually finished by the following year, the projects usually not.

And I still haven’t finished last years vacation knitting, or in the case of a long suffering sweater, the year before that…

But I’ve also got it in mind to start spinning with more of a purpose and sooner-on-the-needles time now too. I don’t have too much handspun (that I like) waiting to be knit up so it’s not really a problem – it’s easiest to solve things that aren’t really a problem. That fiery roving I got last fall is becoming a sontag-like shawl – I’m not sure I’ll use up all of the yarn on it yet, and I’m not sure I like it yet, but I do like the black portion and have been wanting a black neck-thing for a bit, and I do have some black roving, so spinning a lumpy bumpy black yarn and knitting it up will be maddening on both counts, but on my list of fiber priorities and I know it will get a decent amount of wear. 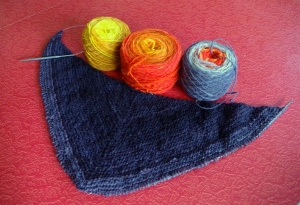 Unlike this one? I don’t know – I was thinking it would be a good visibility piece for hunting season walks, but I don’t wear knits in the woods due to branches and brambles, so unless I stumble across some meadows or moors around here it isn’t likely I’ll use it for that purpose…

I just tossed and re-organized the stash and only found one surprise – some cotton I’d forgotten about, and I’ve now forgotten why I got it – I think it was going to be a skirt since I got it (on sale) around the time I’d made another cotton knit skirt (that I’m likely going to frog soon). 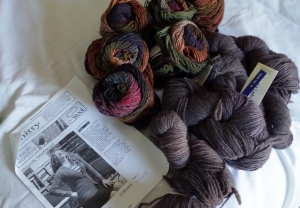 I’ve been thinking/half remembering about this one for a bit – a Shapely Boyfriend out of Malabrigo and Noro – my only hesitation is that Malabrigo is absolute shit for wear and tear. I made a scarf for N out of the stuff a few years ago and it was a pilly fuzzy mess before the season was out.

But the ones I’m actually sticking in the summer knitting bag are an Amiga out of gold bamboo & cotton, and a Burton Vestigan out of green wool & mohair. The biggest gaps in my closet are spring/summer/fall things and buttoning things.

Also soon on the needles is a hat for N out of reflective yarn.

And this very rustic handspun for mittens for me, but the spinning won’t be finished for a bit.

I’m also thinking about felted things, though I haven’t felted with our front-loader yet – some felted clogs for others and myself, and I’ve got some skeins set aside for a couple of felted bags (as well as a heap of feltable cheap/scrap yarn).

And I’m also thinking of a cabled pullover with some special wool, a few other cardigans I can’t decide on yet, possibly a blanket out of handspun llama (or alpaca?) I’ve yet to spin, a poncho – make that two – one for N and one for me (but not matching), gloves (never made those yet), more mittens, more scrappy stole/scarf things like the one earlier this year, and a coat, (and socks -I’ve taken a wee break on those at the moment, but that moment won’t last long).

(Still on the needles is a cotton blanket, a pullover that’s reeaally close to being done if I’d ever work on it, a Paulie cardigan on small needles that has zero satisfaction since I can work on it for hours with little progress to show though I’d get a lot of wear out of it assuming I don’t get bigger before I finish, a dish/wash cloth (I think the last) for waiting room knitting since I don’t have a pair of socks on the needles for the first time ever, a couple of thrift sweaters getting knitted cuffs, collars, and button bands, an old shale/feather and fan scarf that I’m 95% sure I’m going to frog, and this shawl/scarf that I love and should just keep on keeping on with it…)

Tagged as casting on, knitting, startitis, stash, too many projects, wool, yarn

I thought that by going back to a physical workplace after telecommuting for the last four years, I’d magically have more time. I know that’s not how things actually work scientifically, but I generally get more done the busier I am, and some of my best/most complicated/largest projects have happened when I was working more than full-time and/or more than one job and didn’t know up from down.

But I’m still settling in to the new routine I suppose, as is the dog (who is making progress somewhat but not enough yet), and the house and garden still need much more attention than just a bit of maintenance here and there…

But I’ve also got a case of raging startitis, with no accompanying secondary infections of focusitis or finishitis, so I need to reign things in a bit.

My all time favorite LYS recently closed – technically it wasn’t local to me anymore, but I occasionally ordered from them over the phone, and stopped in when passing through my old city – the news about it was sad, and perhaps moreso because it was one more severed tie to the place (and the shop was possibly a victim of the ever-increasing hipsterization and gentrification that is utterly ruining the city).

The Garden State Sheep Breeders festival came and went – I nearly missed it because I hadn’t registered that it had turned September (apparently I did that last year too) – and it was a little disappointing this year – fewer vendors and fewer unique breeds of wool for sale (if you want Romney, Jacob, or Alpaca, NJ is the place for you).

(Not that I don’t like Jacob and Alpaca especially, I just have enough for now.)

Garden state sheep breeders festival today! And stuck to my budget and current plan to buy colors out of my comfort zone, though mostly that just means stop getting green things since I'm quite a fan of oranges too… #woolfestival #gardenstatesheepandwool #gardenstatesheepbreeders #dorset #wool #roving #spinning #dailydoseoffiber #fuzzyfrogfibers

to make a superhero flaming cape-like shawl I guess?

And a couple of ounces of grab-bag fiber here and there from the fiber folks – I hate to call these pity purchases, but that’s what some are, and the rest are more of a penny candy approach…

But this means I need to oil up the wheel again and get spinning – it has been montionless for months – and it’s finally cool enough to start back up.