Addendum to the end of March…

I’m still waiting for the tiles to come in – I got the call that they came in, but when I went to pick them up, they had cancelled the order instead…

Not sure what happened there, but hopefully there’s still a bit of a time buffer…

Which is good because I can’t decide on the paint color.

This was the “temporary” fix – grey and pink – but the grey is much too pale for the soon to be mostly white with a bit o’black (bye bye almond!) tile and fixtures. 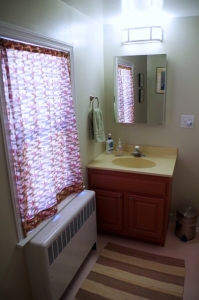 The three colors in the top pic are already in the house – I like repeating things for some degree of continuity – but these are all love it or hate it kind of colors.

Well, every color is really I guess…

The mint is in the kitchen. 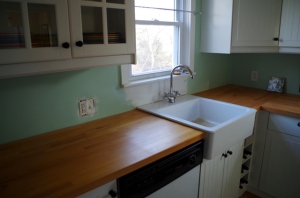 It was our first, first choice, but the bath is pretty dim, so I’m afraid of it falling a bit dull – it didn’t work when we tried it with the almond fixtures.

The yellow is in the living room. 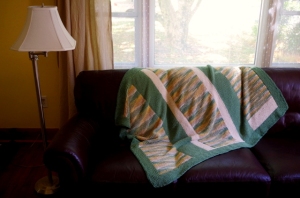 It’s been my current leaning-to color.

And the dull pink is in the guest room (doesn’t photo well, but it’s pink enough to not be band-aid, but it’s on the earthier side).

This was our choice for a good bit of time, partly because it’s already in there a bit and I could keep the curtain.

Which is another choice…

There’s just the right amount left of this vintage fabric that could work if the tree-like things were on their sides instead of upright – that might drive me nuts, but it works for all colors…

(I should have saved peach for it, but it’s already in the bedroom and half bath…) 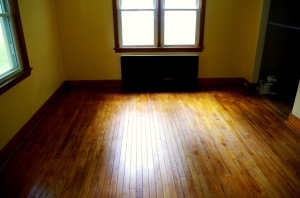 …but the dining room and my studio room are now mostly done.

Only four more rooms and three hallways to go – will I or won’t I endure? 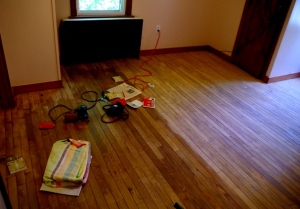 We had a guy in the other day to look at something that seemed to be beyond our abilities.  He came somewhat unexpectedly as people are wont to do in this small town which leaves me occasionally on edge since my work (not work, work) clothes are the shrunken bits thrown in the charity bag (I can’t find my stash of work clothes!) and I don’t want to be seen in busty gut-baring teeny t-shirts and sweatpants with burst seems.  We were in the middle of sanding the dining room floor by hand – with little electric sanders, so at least with the aid of some power…  he smirked and said “well you could do it that way, but I’d rent a sander.”

No f*ckingshit you’d rent a sander – most people would.

But floor sanders are big and heavy and use a lot of sandpaper and cost money to rent and we can only do one room at a time since we’re living in the house, so for about $10 worth of sandpaper (and a whole day) I can do it myself.  (And I mostly did it myself since N quickly looses interest/endurance on these sorts of mind-numbing vibrating tedious tasks, and I’m able to call up the genetic reserves of my peasant ancestors from time to time).

And I also like the way it looks.  In our old house, I sanded a few rooms by hand, and a few with a sander – the floors done by hand still looked old in a good way – they had more depth and patina and character.  The ones done with a sander looked 1,000 times better what they had (and a heavy grind down really was necessary) but they were a little too clean and bright even though I matched the stain with the old.

I also chose to use a hard oil wax product on these floors instead of polyurethane.

That one gets another smirk from the work guys – “you could use that, but nothing wears like poly!”  But poly looks a little bit like wood in plastic coating and I wanted something a little more rich and velvety.  Again in the old house we used poly – the oil based stuff so it would take on a bit of an ageing amber tone – and I liked it, but after four or five years I was finding a few flakes and scratches and I was able to repair a few areas, but I felt sick to think we’d have to go through the whole business of sanding and re-coating the entire floor in a few years.  But I could eat these words since we’ve only had the hard oil wax for a week* and I’ve no idea how it will hold – especially once there’s a four-footed creature about, and dinner parties.  But I should only have to hit the worn areas with a fresh coat every few years instead of the whole sanding down and re-sealing business.  And this stuff doesn’t require buffing like old-timey wax.  So we’ll see.

You could be wondering how the linoleum  floor patch looks now? 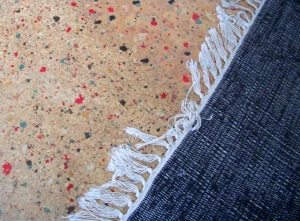 It’s holding up just fine – the rug covers about half of it, but it still gets walked upon plenty.

But this linoleum will  certainly not be saved…

…and is a tiling project next on the list.

*I coated a few broken steps with it a couple of months ago and so far the test areas have held up well.  And for the record, it’s Fiddes Hard Oil Wax in “American” tint.  I got it online, but it can also be had in a few actual shops in Brooklyn and other hipster places in the states (it’s a British product).  I used two thin coats with a bristle brush and I’m contemplating a third, maybe of clear, in the highest trafficked areas.  It stunk a bit, but much less than the common brands of oil-based stain, and it dried in a few hours, but I waited to put rugs and furniture back in for a few days.

**The colors aren’t right in these pics – the trees around the house are throwing green light into the place, so everything – floors and walls – is a warmer, less yellowish more orangeish tone – I’d call the floors a bit of a warm pecan shade.  And those big black rectangles are naked radiators without their front cover pieces.