Ghosts in the garden, sheep at the fair

Last week saw a day over 100 degrees Fahrenheit here… And it hadn’t rained in nearly a month.

The lawn, which is mostly weeds, was mostly dead, the rain barrels were empty, the well getting low, and my seedling hopes for some fall crops were scorched and disintegrated…

Except for a bit of greens and radishes we managed to save with a pack of very cheap, unused sheer big Swedish store curtains that worked as excellent covers. I love it when having something too late to return and not yet dropped off at the thrift store pays off well – a nice satisfaction and justification for my mild hording habit…

They still catch my eye at dusk – something phantasmagorical hugging the ground as the bats begin to fly about, but hopefully we’ll still be eating our own fresh things until the frost or just a bit after. The tomatoes are soldiering on despite some still lingering pests and diseases, and it’s finally the time for some of the ugliest but tastiest heirlooms.

And our tiny and woefully inadequate parsley plants attracted some munchers I don’t mind. I’m pretty sure they’re Eastern Black Swallowtail caterpillars, which are quite common around here, but slightly odd since I saw a kaleidoscope of Tiger Swallowtails in the yard this summer instead. I was tempted to mess with mother nature and bring them in to save them from hungry birds and watch them transform, but I don’t know what they do at this time of year – turn quickly, or sleep it out over the winter? I’d hate for someone to hatch in the basement in January and die, so I left them be and they ate every last bit of our parsley and took off (or got chomped). I’d hoped that they would do their pupating thing close by so I could watch and also make sure we don’t mow or turn them under, but they didn’t leave a forwarding address…

So with all of this scorching weather, the last thing on my mind was that it is officially wool festival season around these parts – I had no idea on that 100+ day that in less than a week, I’d be trying not to buy much of anything soft and lovely and watching wooly things on parade… but luckily I saw (and paid attention to) one of those low roadside signs (typically advertising cheap king mattress sets, or sadly fighting against a proposed pipeline) for the Garden State Sheep Breeders festival just in time. 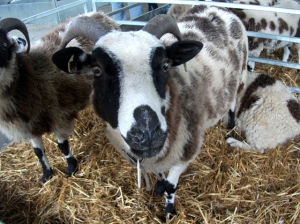 The day was overcast and becoming cool  –  the same seasonally-appropriate weather as the festival in years past. I bought just a tiny bit of roving, though there were more than a few tiny things I’d have liked to buy, especially since I most enjoy meeting the beast (or at least seeing a picture) whom I’ll be spinning or knitting. I get more than a bit turned off at the overtly religious [sheep] breeders though – I don’t want to give someone money who might then use it to support someone or something I don’t. But I guess I prefer being an informed consumer rather than an ignorant one, so jesus fish and bible quotes on your sheep signs are an effective deterrent – I get that whole shepherd reference, but it’s so damn tiresome…

I spent more time watching the sheepdog demonstrations this year, and missed out on the lamb barbecue sandwich because I ran out of cash – always feel a little funny eating those around their living comrades and kin though…

These last few days have bright and cool, following a few inches of delicious rain – nothing like the inferno last week. I am once again awakened before dawn by the neighs and purrs of screech owls from the finally opened windows. 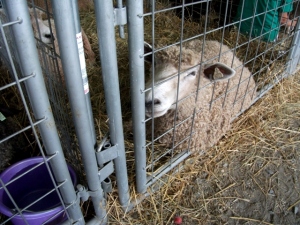 Folks are always in a tizzy about Rhinebeck and the Maryland Sheep and Wool festivals, but smack in the middle is the small and very manageable Garden State [aka New Jersey] Sheep Breeders festival.

I went several years ago and bought a large amount of  raw alpaca fiber.  I think it was before I owned a spinning wheel, and had just learned to spin on a Turkish spindle…?  And I also thought I got a really good deal, but I didn’t – though it’s in beautiful natural fawn, grey, and black colors, the fibers were shorn at a very short length, so I’m not able to spin it (at least not without experiencing anger).  I need to felt it, blend it into something else, send it out for commercial processing, or just sell/trade/gift the mess.

I thought that this year’s festival would be bigger, and I think there were a few more vendors, but as a whole it’s small and I love it – no crowds, no pushing in booths, and plenty of time and space to enjoy the animals. 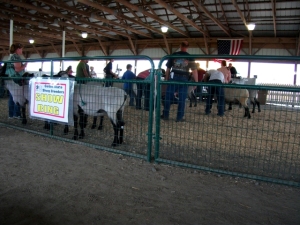 And it really is about the animals – I know those other large festivals are too in theory, but the wooly nirvana shopping frenzy is the annoying take away.  I like watching the judging, even if it’s for the meat breeds – brings me back to my 4-H youth, and I can still spot the nicest hindquarters most of the time.

There may have been fewer breeds on display this year too, but I’m not sure.

N’s favorites are the angora goats. 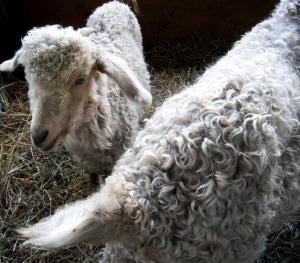 And I’m a fan of the Jacob sheep. 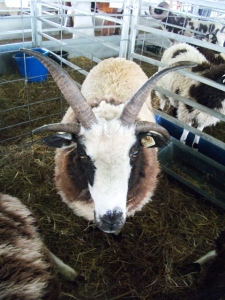 This little one – not sure if she’s Shetland or one of the small Cheviots – was bleating her cute little head off louder than anyone in the barn.

It seemed she just wanted attention, or she was nervous about an approaching late summer thunderstorm, or her buddies were in the ring and she was lonely, or she knew she was in the wrong state and the others were going Jersey on her ass… 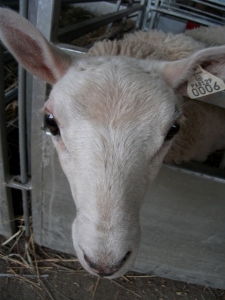 But she calmed down once she got to pose for snaps.

[And for those who think they have an idea of what NJ might be like, they’re most likely wrong – this part of the state might as well be the Midwest, complete with more reasonable drivers and farm smells rather than malodorous chemical plants.  Actually the farms are really well-managed around here and rarely give off odors unlike the factory farms of PA].

On our last vacation, I managed just walk on by two decent-looking LYSs, and we drove right past WEBS since I knew that wool festivals were coming up. I’ve also been good about passing up sales at my favorite indie dyers and deeply discounted full lots of yarns over the last year, so I could spend a little on some fiber directly from the source.  I love so much of the beautifully dyed yarns out there at festivals though, and always kick myself for not picking up a skein or two of something gorgeous, but at nearly $30 a pop for most, I can get more [and more unique] fiber instead.  This would have been the time and place to pick up a few of those skeins though – some of the same booths at Rhinebeck are virtually impenetrable.

The fiber-bearing-animal-keeper folks around here seem to prefer Romneys and Alpacas, and I’m done with both of those for a bit – I’ve spun plenty of Romney, and though I love a “rustic” yarn, I’ve already got enough, and I don’t love knitting with it.  And the Alpaca is lovely, but the good stuff is pricey and I still have some waiting to be spun, so I’m mostly looking for different breeds to try, especially if they have a name and a face.

So a few ounces of Gustav the Gotland came home with me.

He lives at Cloudberry Sheep and Wool farm in central NJ and is a lovely pale to medium grey.  I’m not sure how I’ll spin him yet, or if I’ll combine some of the various breeds I’ve collected into some sort of sampler project, or make small accessories of each…