After digging through the woolens recently and finding the sweater to de-turtle, I also came across an old pair of gloves I’ve had for more than twenty years. 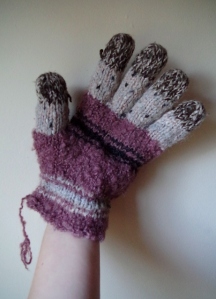 I can’t remember where I got them, or if they were a gift…

I think I had them in college. I might have had them earlier.

My only clear memory of them was when I wore them frequently in a hospital when I was selling my body for science to pay off student loans. The techs would poke and prod and then wheel me to other wings and other floors through freezing corridors, and by the time I arrived to be further poked and prodded, my veins would have shriveled and buried themselves deep into my bones. So the gloves helped keep my blood circulating and earned me the nickname “muppet hands” with the staff.

They’re at least partly wool, but likely not all. They’re hand knit but in a loose-ish gauge, the ends weren’t woven in, and the knots were poorly done and poking through. They aren’t as warm as they look unless my hands are also in my pockets or I’m wearing glove liners because the wind goes right through them. But worst of all, they’re floppy – a quick flip of the hand and they go flying – rude gestures aren’t as effective with the comedy of flinging tendencies.

But I haven’t gotten rid of them, though they’ve spent more time in the charity box than not.

Every autumn I think I need gloves and mittens and pledge to knit some. But every year I discover that I still have several pairs of insulated leather ones from my days of wearing professional-ish attire, a few random pairs old or quirky, and ones appropriate for frosty outdoor activities. But I always blank for a moment when I’m running out the door to do something errand-like, and my fingerless mitts (of which I have many) just won’t cut it and I don’t care if anything is coordinated or looks particularly decent.

Growing up, our family had semi-communal boxes of hats and gloves/mittens. Of course everyone claimed favorites, but if you needed something in a pinch, you could just grab something from the box and be on your way (unless you had to search for the second half of a pair). I’ve been thinking we need this sort of arrangement even though we’re just two, but it comes in handy for guests too. These gloves would be perfect for such a box – large enough to fit nearly anyone, and not so precious or specific that if they’re lost, it’s not a loss to be mourned.

But the flop and fling wasn’t going to work for anyone, so I got out some charcoal worsted, picked up about half the stitches, and knit some k1, p1 cuffs. I also poked in all of the knots and ends (though I’m sure they won’t stay in for long) and gave the pair a nice long bath. 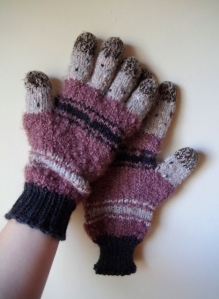 And now they’re functional, albeit with a baggy lower palm, but their fling is finally over.

I have another pair of mittens that have a similar issue, but I think I’ll try sewing some elastic in those…

I’m also thinking we need a couple more loose-fitting, but warm hats for the box too…