The bathroom is finally [almost but basically] done.

I was going to wait until the last of the touch-up paint was dry, the rest of the pictures re-hung, the little vintage medical cabinet back in its spot, and new rug and towels procured, but then I saw the missing threshold and knew how long I can take with those, and I don’t have immediate plans for the new built-in cabinet, so enough already.

This is what we started with:

What you don’t see is the three broken light fixtures, a broken fan, a broken window, some broken plumbing, the big stain in the floor by the toilet, and the well-worn acrylic tub and surround.

What we did for the meantime (that was supposed to last 3-5 years) was to fix the window, the electrical (including the light above the sink), replace the rusty triptych medicine cabinet that bisected your face, and paint everything – especially the floor. And we thought we fixed the leaking toilet.

But the toilet was still very sloooowly leaking, and eventually we couldn’t ignore that we were finally stepping on a spongy oogy spot – the leak had spread in the subfloor a couple of feet.

So we committed to fix the whole damn thing ahead of schedule.

And I went a little nuts over the whole thing – not good nuts – just frustrated and confused and decisive and indecisive and then frustrated again and again. I don’t know what went wrong – I can usually bang this shit out – there were too many options but not the options I wanted. And then everything was more expensive than I wanted to pay, everything I’d picked out went discontinued or out of stock in a matter of days, I couldn’t find professional help where I needed it, and then the sewer pipe went bad too, and then I (we) changed my mind over and over again…

This shit woke me up in the middle of the night and it is absolutely something that shouldn’t do that.

But then I got what we needed and the plumber was able to book us for 5, yes 5 weeks in a row….

His first visit for the bath was the longest, and I was whirling in the throes of reno anxiety- we’d removed all of the fixtures and demoed the floor which is fun and rewarding (thank you for dealing with the toilet N since that isn’t fun) but then all of the worst is yet to come so it is a false reward, it’s the ribbon for participation without achievement. The first day of the plumber was also the first spring-feeling days and the leaves had yet to come out. Our new tub sat in the yard for hours (as did some copper pipes) and I equally fantasized about the bodies that could fit in its box and was amused that we live someplace “safe” enough that copper can lie about unsupervised…

But afterwards the real work began.

I’d researched some of the new waterproof wall systems and was planning to use one of them, but to save money in the end, we used backerboard and a paint-on membrane. By then the membrane fumes and the project crazy converged and I think I vocalized a few of the redrums shouting on repeat in my brain. 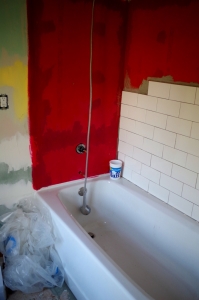 But once the bath tiles were up, I cooled down to a workable, only slightly unhinged, state.

The wall color choice was a bit of an issue – I wanted to repeat one we already had in the house, and we loved the kitchen’s mint, and online polling voted overwhelmingly for the mint, but it was just too intense (as was the yellow).

(I don’t wear make-up and the two of us have yellows and greens in our skintones, so I wasn’t worried about looking in the mirror in a green room.) 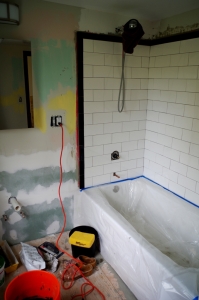 But we fairly easily agreed the dusty/dirty “champagne glee” pink would be the best – and we’re happy with it.

And then it was time for floor tile – I’ve used a similar one to this before, and our half bath has a mosaic pattern too.

I knew I needed to spend the time to dry fit it to make sure that the pattern was right and to make some of the cuts beforehand. 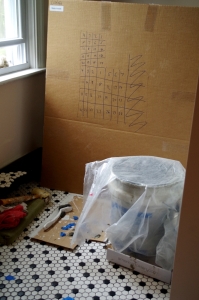 N numbered the tiles and made a handy chart for me to use – it was foolproof. 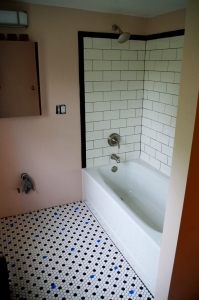 I thought the layout was perfect – N found a flipped tile, and we didn’t see any manufacturing flaws. 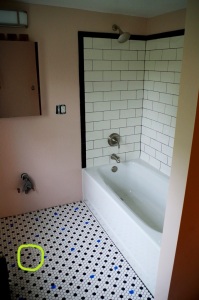 But there was one.

And we didn’t spot it until it was grouted.

The elements are both a bit more vintage than the ’50s, and contemporary – but it isn’t out of place with the rest of the little house. 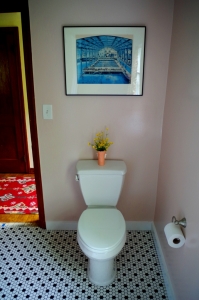 And the tile feels so nice on my feet…

And the shower is roomier and brighter, and the tub worth taking a lingering bath – thankfully we got it in springtime when the well is full.

(And yes, we really need that threshold).

Still in the bathroom

Another day, another day without plumbing…

(And of course I’ve got to pee – I thought this plumbing visit was going to be just a couple of hours, but it’s another all-day affair).

The bathroom saga is finally well underway, and long, and tiresome, and not yet done…

Sometimes I think I wouldn’t mind having a cabin way off the grid and without most plumbing. You’d be prepared for it, and most of the time the weather would be warm enough for an alfresco splash down, and composting toilets aren’t that bad if not shared by too many. But not having a fully functional bath/shower in your everyday home sets my nose out of joint. I’m one who must shower every morning to wake up, open my sinuses, de-creak my body and to get clean at an even rate. For most of the four years I worked from home, I tried every variation of less-often hair-washing, no-‘poo, some ‘poo, conditioner without ‘poo, cooler water, etc., etc., but in the end, I could never get used to feeling unevenly clean.

So today I’ve had the last shower I’ll get for the next week (hopefully), or two (likely).

We de-almonded the room first with joy and abandon I later regretted (from pain, not fondness), repaired the rotten subfloor – opening it up brought forth such an intense stench – thankfully like a rich, deeply composted forest floor rather than an excrement-soaked one, but mildly gag-inducing just the same, and after the plumber puts in the new tub, we’ll be tits deep in the most difficult tiling job I’ve done. I’m sorta kinda looking forward to doing the floor – hex tile is easy to work with – but the shower walls have got to line up, and straight lines aren’t in my playbook.

Bathroom reno beginning… maybe the walls should be jordan almond camo? (Pink is winning at the moment, and again damn you last owners for doing such a piss-poor job and/or ripping out the original.) #bathroomcolors #bathroomremodel #bathroom

The paint ended up being the dull pink “champagne glee” to be exact, and yes, the name partially sold me on the color the first time around. We loved the mint, it is perfect in the kitchen, but it was too intense (as was the yellow) in this small dark room.

It is now a week later and I’ve got the sink bath down to an art as well as a science, and neither of us smells too much, though maybe we’re nose blind.

And yes, the plumber is here again!

But I won’t blather on about my bladder again.

The tub/shower is tiled and grouted and has fixtures – the grout is still curing though, so no shower for a few more days…

There is wonkiness of lines, of course, but less than I’d feared – the ceiling is nearly 2 inches higher on the one side than the other, so it is what it is.

Next up more wall repair and painting – not in love with the color yet – it’s leaning a bit beige (NO NO NO!!!!) but not enough is on yet to tell.

This weekend will be for tiling the floor.

Hopefully my fingers will be healed in time…

Things are still busy and will be for the next few weeks, month, some period of time that will perhaps never let up.

The premature spring followed by the belated winter has messed with my head, but the extended daylight makes things a bit more correct again.

A small herd of deer has taken a fancy to the yard.

The dog absolutely does not fancy them.

He starts a new class for complicated dogs next week – fingers crossed he’ll soon learn to cope with other four-legged, or rather, all, creatures soon.

Fiber-wise, I’m still finishing up several things and resisting the temptation to start anything new.

I’ve started the garden seeds, and N has started to break up the concrete walks to nowhere in the yard.

It’s sucky work, but he’s an ace with a sledgehammer and we’re saving a good chunk of money on the deconstruction.

We need a helluva lot of plants – ones not delectable to deer – but I’m happy to reduce the lawn as much as possible.

After looking at hundreds of tiles, various solid shower wall options, and green resilient flooring, we settled in our comfort zone – all tile, tiles we’ve used before, ones that are very affordable, and fit into the vintage cottage vibe going on in the house already.

First we have a bit of an emergency with  having to replace the basement sewer line though… a rather shitty situation.