Our “finished” basement needed to be finished some more.

The only redeeming quality was that half of its lights are groovy. But the ceiling was styrofoam, the floor is skim coated with cement covering up god knows what, and I have no tolerance for thin, cheap, and dark paneling.

Painting the paneling was a no-brainer. I made a brief attempt at whitewash, but it looked terrible. And I wasn’t about to take the time and energy again to fill in the groves to mimic drywall, and doing new drywall would have been more effort, expense, and bad for the environment since the only place for paneling is a landfill, or a fire.

So a thick coat of primer and a couple of coats of pale green-grey paint later, it is fine – for a basement. I went with the same color scheme as my tiny studio (and it’s also the same green-grey as the temporary bathroom fix) because I like it and there was leftover paint. One wall only has half paneling/wainscot and another has built-ins, so those started to become yellow along with a couple of doors.

But it didn’t work for me, despite the fact that one wall was perfectly painted – the yellow was oddly too cool.

So I went out and bought more of the same orange that we’ve been using on all of the outside doors  and painted some sample strokes over the yellow.

But apparently, I forgot that I had added white or some other lighter colors to the original inferno orange…

In went a pint of a bad yellow, a near-full pint of a pale lavender, a spoonful of the green-grey, and the dregs of some bright white used on the trim in the kitchen…. 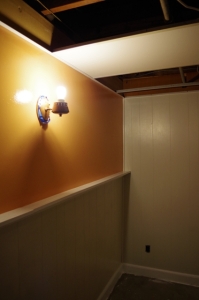 And thankfully, it worked – at least in the way I wanted it to – a warm, bold color familiar with copper.

But the color scheme is a bit on the odd side – the green-grey looks white, so it’s a bit like a fuzzy freezer burned creamsicle, but it’s the basement, right?

I’m not crazy about the other half of our light fixtures – not sure what the original owners were thinking mixing mod with colonial revival, but at least both are copper.

And don’t get me started on the agony of figuring out what to do with the drop ceiling and the defeat of just buying new panels, albeit, smooth ones… and ones, I might add that were woefully damaged and without any attempt at quality control. I’m looking at you, Armstrong. But thank you N, for dealing with making all of the cuts thanks to the dumbass original owners who didn’t lay it out in the direction that would have minimized cuts…

The floor will soon be painted a dark tealy-green and then we’ll finally set up N’s library, my favorite old oak library table, some of my found objects on the built-in shelves, all of the artwork that didn’t make the cut for the walls seen daily upstairs, a lounge area for hot summer evenings, a corner for my stationary bike, and then there’s still plenty of room for a floor loom…

(And maybe a pinball machine for N.)

We finally, successfully bought a house. 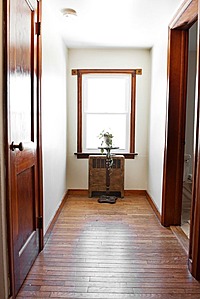 This little hallway sold it for me – I love a good hall and nook.

However, much of the place is not so good, so I’ll be spending the next few months patching and painting and sanding and staining and sealing and tiling and ripping out [not stitches] and installing and digging and hauling and biting at the heels of one or two hired professionals.

I won’t go in to the rehab to tiresome lengths (or maybe I will someplace else, because I regret not better documenting our last home transformation) but the place needs some serious color and character and will take the place of most of my fiber work in the near future – but then again, we also need curtains and re-upholstery and rugs and something to disguise a nasty basement drop-ceiling…