What’s in the basket? 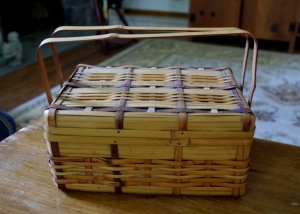 I say I’m on a buying of all things, especially old things, hiatus… perhaps even a lifetime ban.

But I couldn’t resist a gourd.

I could plant some gourds, I could probably get one free from a neighbor, but I actually paid $4.00 for this one. 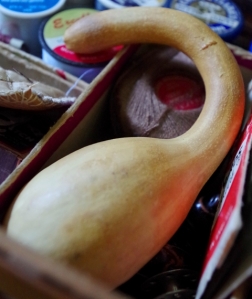 Because it was used as a darning egg!

And came with a basket filled with other useful things. 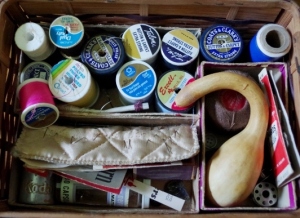 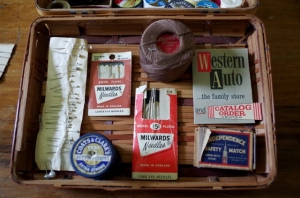 (the notions, not the dust wads.) 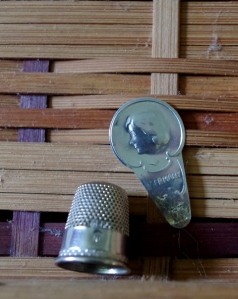 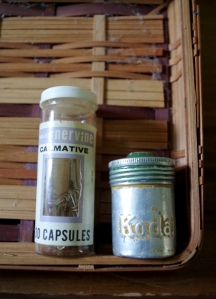 And another mysterious notion – what is it? 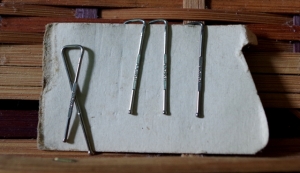 It’s got “Waldes Perfex” stamped on it as a registered trademark.  I couldn’t find the trademark, but several patents on “Perfex” exist for textile, cleaning, and photography products.  I find anecdotal evidence of others finding these with old knitting supplies, so perhaps they’re stitch markers?  They seem a bit pokey and impractical though…  I can’t think of an application for them with photography unless these were poked through the sprockets in film for some reason or another…?

Anyone know what they are?

I’ve never seen the movie, but I just might have to check it out…

Quilts (okay, a pieced top) in my past, part V

The last (I think) in a series including part I, part II, part III, and part IV. 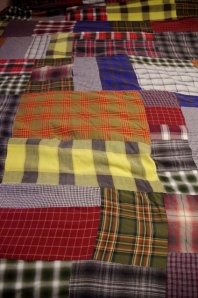 I had a few contractor bags of textiles in storage.  Normally, I would never store textiles in what was essentially a garage, nor recommend anyone to do so, and if I was staying at someone’s house and knew the bedding I’d be using had been in storage, I’d really consider sleeping uncovered on the floor, or in my car.

But we checked on it three or four times a year, and I monitored it for stench and discolorations and chew marks and desiccated insect corpses (there were a few stinkbugs, but I’m used to those mysteriously making their way into our houses old and new anyway).  But everything was fine – even the upholstered furniture.  Everything that could be was washed was, and the furniture sprayed with diluted white vinegar and set out in the warm sun for the better part of a day.

One of the items bagged up for the last few years was a randomly pieced flannel duvet cover I made around six years ago. 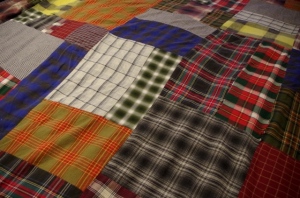 The fabric is entirely N’s and my shirts and pajama bottoms – most dating from the Grunge era.  Among my eclectic-dressing high school chums, we called a plaid flannel shirt “flaid plannel,” as in:

“What are you wearing to the show tonight?”

(And do I need to remind you that was before docs were made in China?)

The orange and green shirt was a favorite of mine in high school (and paired well with reddish boots.) 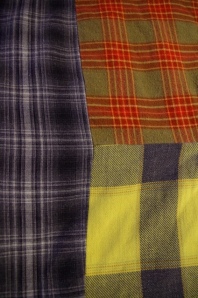 And the yellow and black a favorite from college (paired with a secondhand and smelly, but awesome, pair of black docs).  Some of the patches have oil paint and darkroom chemical stains.  The grey and black was one of N’s shirts and one of the softest flannels I’ve felt, but also several sizes too large for him as was characteristic of the ’90s. 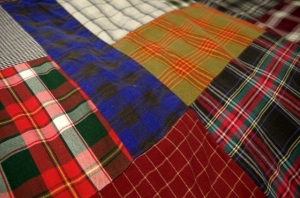 I don’t use actual quilts very often – in the summer I prefer a coverlet (or I need to make a lightweight quilt) and in the autumn, winter, and spring I have to have a down duvet.  On the coldest nights, I’ll throw a wool blanket over the duvet, but down is the only thing that gets warm fast and stays evenly toasty but not too hot, and makes me a happy snoozer.

So this is not really a quilt, but a duvet cover with a pieced top, and since it’s washed more often than a quilt, some of the seams have popped open and are in need of repair.  It’s also a bit too small – I hate that full/queen size in standard manufacturing since queen is bigger than full, they are not interchangeable – so I’d like to add another few inches to the width for better drape even if the feathers don’t fill it out.

Let’s [not] do the time warp again… 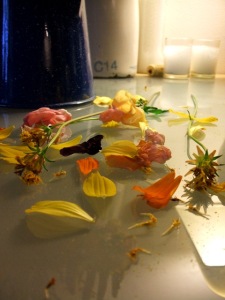 It’s happening again… things have only ramped up by a quarter or a half turn and suddenly I can’t account for great blocks of time.  Many things are in the works, nothing is ready to be finished yet, and my wrists now ache constantly.  Part of the time is sucked away into to the house-seeking black hole – houses that have been on the market for months, years are suddenly going under contract the minute we decide to move forward (and after we’ve spent the mental energy and time it takes to look at the place, review the flaws, and decide to pull the trigger).  Part of it is my part-time work is cycling up to the busy time, and the other parts when I’m not knitting, sewing, spinning?  I have no f*cking clue.  It’s so hot, it’s so humid; my spinning is sticky and not so smooth, the power keeps going out for short periods in the afternoon, and I can’t keep to my schedule although I’m working nearly constantly.

Some of my work doesn’t involve having to pay attention to words so I can listen to music while I do it.  When I worked at my old full-time job I’d have days on end of correcting numbers, making database tweaks, and looking at thousands of images so I could listen to episodes of Radiolab and This American Life, those teach yourself a new language programs (though they never stuck), and even audio books while I worked… it was, and I mean this with no irony and with a shrill teenage-boy tone, awesome. 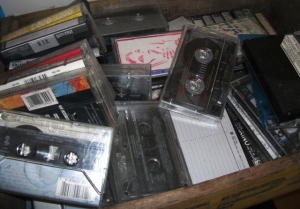 So lately I’ve been making an attempt to weed and dispose of my old cassette tapes when I’ve got a chance to listen to things.  Unlike my peers at the time, I don’t have too many – I preferred vinyl albums (but made tapes from them to preserve the albums!) and then later bought CDs (for a while I even saved those ridiculous longboxes in which they came).  I don’t think I ever bought a non-blank tape except a few from small local bands; most were mixes and dubs, and a few commercial ones were acquired second-hand (ahem, or shall I say out of the trash).  The fact that I still (only) have a stereo that plays cassettes might say something – actually it isn’t even a stereo per se, just one of those old bookshelf boomboxes (c.1988) with a full-deck CD player (c. 1992).  But it works and sounds surprisingly good.  I also have a tape deck in my car (and yes, my car is that old) but it works, but it doesn’t sound that great, the air-conditioning is broken, pieces keep falling off, but it gets me around. 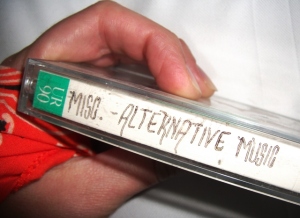 I came across this tape recently and I have no idea of its origins.  It wasn’t mine – it’s not my handwriting nor my preferred type of cassette.  And it also couldn’t have been mine or a friend’s because we all listened to alternative music so it’s odd to have labeled something “alternative music” as if it is an exception to the collection.  It wasn’t from an old suitor as there are no love songs or particular attention to themes.  And the songs are merely jotted down on the insert and not decorated in fancy fonts or different colors.  A brief aside about tape decorating:  I arrived at speech class one day and didn’t know or remember it was my day to give a demonstration speech.  I had a backpack full of tapes so I demonstrated how to decorate them – I actually got an A – I wish my one ultra successful winging it episode wasn’t wasted on high school.  Anyway, the last time I acquired some tapes was from the detritus of someone who left my old apartment building maybe 8 or 10 years ago, so that is the possible provenance, yet most of those tapes were commercial and I keep them in my car now…  so it remains a mystery.  And an even bigger mystery because many of the songs on it are the ones I listened to, but the biggest mystery is that it has several tunes from the Rocky Horror Picture Show on it.  I went a few times back in the day but I was in no way a regular…  Was this given to me by someone who wanted me to go more often?  I have no idea.  But I’m blaming the time warp for everything for which I cannot remember.

I’ve been dismantling the tapes since the spools take up a lot less room than the whole boxed cassette.  But I haven’t decided if I’m going to knit, weave, or do anything with the stuff.  I hear it’s toxic due to the metals in magnetic tape and I’ve tried knitting with it already and hated it, but sometimes my brain likes to dispose of things slowly and in stages, so I’ll let it this time.  Let me know if you are a fan of cassette tape for purposes of making sh*t, and maybe I’ll hook you up…

Oh, and I saw this article recently about the Knit the Bridge project in Pittsburgh – looks like a very cool thing and they still need money, so spare some if you’ve got it!

[And one last anecdote about tapes – around 15 years ago my flatmate left a box of old dub and mix tapes on the curb for the trash (or a passer-by).  Later that week, I found some of the tapes at a Goodwill several miles out of town!  Yay for the considerate trash-picker!]